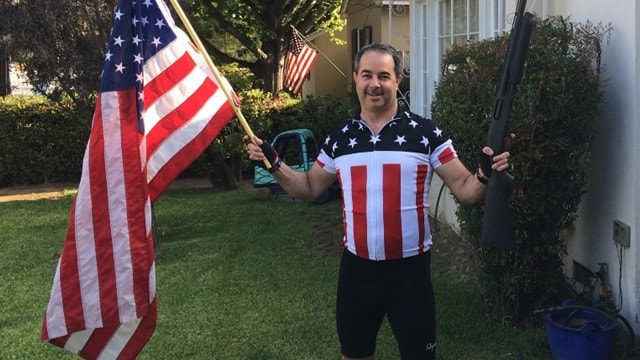 The author of the post, Michael Pusateri, on July 4. He is described as a “Evil Corporate Exec, previously Technology Ronin & Man of Leisure.”

Writer Michael Pusateri published a letter on Medium.com on Oct. 8 explaining why he went to his local police station to have his guns destroyed.

Last week, I sat in a hotel room and watched the President talk about the latest mass shooting and how they had become routine and the concern that nothing would change. I started to shrug it off and pretend in my mind that there was nothing I could do. But the idea that gun culture doesn’t bear some responsibility for these killings didn’t make sense to me. I didn’t want to be a part of gun culture anymore.

I was never going to use these guns for self-defense, they were safely locked and out of reach. I don’t hunt. I don’t shoot clays. There are no dangerous animals where I live. There are no zombies. I’m not a police officer or soldier. I am not part of a well regulated militia. There’s no reason for me to have them.

So I got rid of them. Firearms are no longer a hobby of mine.

Like clockwork, the reactions to Pusateri’s letter were predictably polarizing with some praising his decision and other condemning it. Many brought up differing views comparing guns to cars, some included religion to justify their beliefs, but oddly enough, of the 128 comments no one has been compared to Nazis or Hitler — yet.