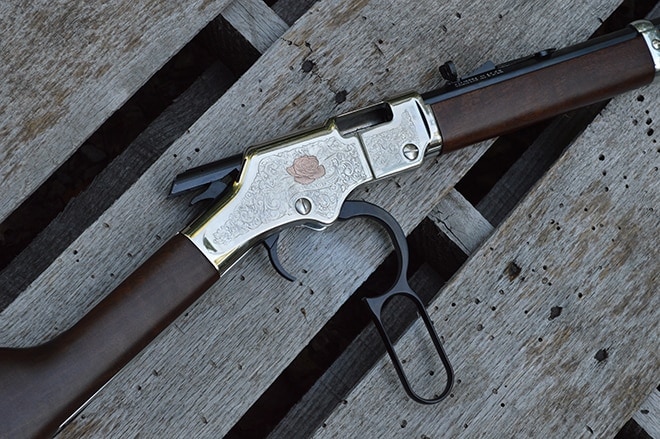 Henry is an American original and well-respected name in the firearms industry. From the days of the Civil war to the wild west to the modern era, the Henry Repeating Arms company has been there. And they’re not just sitting back on their haunches; no, they are moving forward with both innovation and romanticism to meet the demands of today’s nostalgic and demanding shooters and hunters. Here are six reasons why any gun-lover should be aboard the Henry wagon-train. 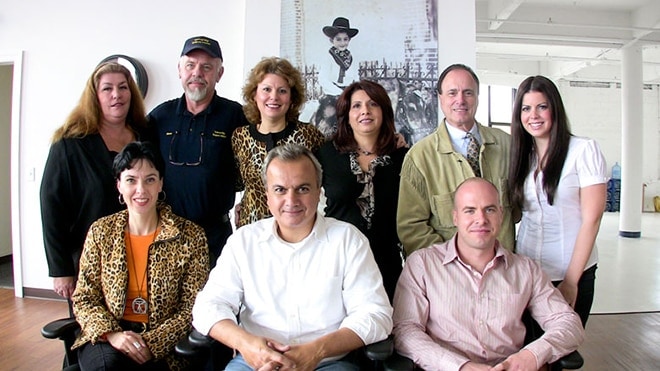 Henry Repeating Arms guns are “Made in America or Not Made at All.” No exceptions. This is the hand-on-the-bible promise from Henry President Anthony Imperato. They use American walnut. The staff is family, friends and close-knit workers. Many of the centerfire big bores come out of Rice Lake, Wisconsin. Most rimfires build and ship from Bayonne, New Jersey. Henry may not be the biggest name in American firearms, but they cannot be surpassed in loyalty.

Henry produces guns almost too beautiful to shoot, other guns that are born to hunt, and plenty in between. Take the Henry Big Boy polished brass centerfire rifle built with an emphasis on looks and its new-for-2015 counterpart the Big Boy Steel built for practicality. There are Golden Boys, Silver Boys, and Steel; engraved, inlaid, and plain-jane. What’s more, Henrys are not just lever-guns. There’s the AR7 Survival Rifle, pump action octagons ala shooting gallery days, and a line of first rifles for youth shooters in both bolt and lever action.

For those generous gift-givers, there’s a Henry edition sure to please every person on the globe. The Tribute line honors those who hammer out the heartbeat of America. On the current docket are tributes to: Military Service, American Farmers, Law Enforcement, Emergency Medical Services, Firefighters, American Railroad, American Oilmen, Coal Miners, Truckers, Abraham Lincoln, Cowboys, Wildlife, Boy Scouts, and Eagle Scouts. There are also highly engraved Silver Eagles as well as the American Beauty.

Just to show you the amount of thought and depth of emotion that go into their arms, the Henry American Beauty rifle was designed by President Anthony Imperato’s late father, who passed away before the rifle could be completed. Imperato had the highly engraved American Beauty built not only as a tribute to American women, but in the memory of his father’s designs. The special editions are, well, really special. For instance, I have never seen a smile so wide as one on the face of a new Eagle Scout receiving his Tribute rifle.

5. History of the company

Benjamin Tyler Henry is credited with initiating the first practical lever action repeating rifle and giving birth to The Henry Rifle. Patented in 1860, Henry rifles were in the hands of Union soldiers by 1862, creating an incredible mismatch with muzzleloaders. The Henry rifle went along on westward expansions and found its lore in wild west days. The original factory was in New Haven, CT. Today, Henry Repeating Arms Company splits production between Bayonne, New Jersey and Rice Lake, Wisconsin.

Because of this history, Henry is a company that honors not only its own roots, but also American traditions. They manufacture Mare’s Leg lever action pistols in calibers from .22 S, L, LR to big bore straight walls. One of their sweetest historical offerings is the the Henry Original—reminiscent of the 1860 lever gun used not only with fame in the Civil War but also to homestead the western frontier. The new Henry Original is a pricey—MSRP $2300—albeit amazing version of the rifle you could “load on Sunday and shoot all week long.”

Not that you’ll ever need it, but Henry customer service is second to none. Their owner is one of the most accessible in the business. He and his family care deeply about their products and customer satisfaction. Heck, for $150, Henry will personalize a rifle for you. There are Corporate Edition guns as well. Who wouldn’t like to get a rifle from their employer? Henry is reachable by phone, fax, or email. You can email anybody from the company directly, including the President. Heck, they even respond to comments on social media.

If you ever meet a gun owner who has never heard of, or owned, or shot a Henry Golden Boy or Big Boy before, sign them up for a free Henry catalog and decal and don’t talk to them again until the mail comes. In all seriousness though, at a time when gun production and quality are outsourced, share some gun-love for a company that does it right: all American, high quality, top-end customer service.