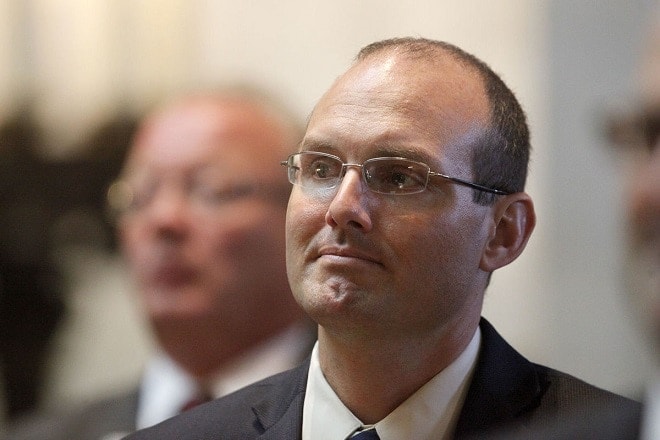 Wisconsin Rep. Jesse Kremer is among those trying to bring campus carry to the state. (Photo: Jessie Opoien/The Capital Times)

Wisconsin lawmakers on Monday debuted a move to allow those with concealed carry permits to bring their firearms inside buildings on public colleges and universities.

Backers of the legislation contend current laws require permit holders to disarm prior to leaving home or a vehicle, effectively robbing them of their Second Amendment rights.

“Allowing our public campuses to ban concealed weapons in buildings puts our students at greater risk of becoming victims of crime,” said Kremer in a statement. “Many students walk to and from class in the early morning or late evening, often through high crime areas. Current law requires that they be unarmed. The Campus Carry Act will ensure that our students are no longer denied the right to defend themselves.”

The proposal, to be filed in both chambers this week, repeals current Wisconsin law that prohibits carrying, possessing, or using any dangerous weapon on university or technical college lands, buildings or facilities. While exceptions exist for law enforcement purposes or if a permit holder receives written approval from college officials, Kremer contends this is not enough to deter crime and allow for self-defense.

“As a legislature, we are regularly challenged to take on the issue of violent crime in certain areas of our state,” he said. “The Campus Carry Act offers a common-sense solution to this problem by addressing both violent crime prevention and personal protection.”

But not all agree. State Rep. Melissa Sargent, D-Madison, criticized the bill, arguing it would not be effective in preventing crime and questioning the wisdom of allowing guns.

“I don’t see how this adds to the safety on campus,” said Sargent. “Having folks walk around with concealed carry doesn’t make me feel safer.”

The subject of legal firearms on school campuses has been a battleground issue for both Second Amendment and gun control groups in recent years.

While legislation was introduced in over a dozen states in the last session to expand the practice of campus carry, only Texas, with a strong Republican majority, was able to turn proposal into law. Even then, the measure was watered down after a series of compromises and is seeing significant pushback in implementation.

The gain in the Lone Star State was counterbalanced on a national level by the loss of long-held campus carry rights in California after Gov. Jerry Brown signed a bill championed by state Democrats on Saturday.

As for Wisconsin, the GOP enjoys a healthy margin of control in both chambers of the state legislature and Gov. Scott Walker, who expanded concealed carry rights in 2011 and proudly displayed his own permit at the National Rifle Association’s annual meeting earlier this year, is considered pro-gun.