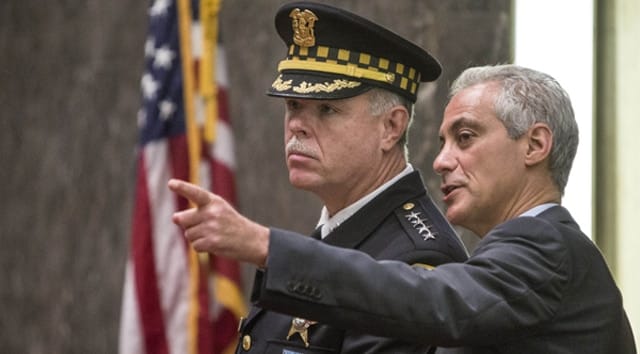 Mayor Rahm Emanuel (right) points something out to Chicago Police Superintendent Garry McCarthy (left), who does not appear to be all that impressed. (Photo: Rich Hein / Chicago Sun-Times)

As the Windy City experiences an especially violent year, Chicago Mayor Rahm Emanuel suggested in a private meeting Wednesday that the fear of law enforcement officers facing disciplinary action is causing them to fall back on proactive policing efforts and therefore contributing, as least in part, to the growing crime problem.

“We have allowed our police department to get fetal and it is having a direct consequence,” Emanuel told U.S. Attorney General Loretta Lynch, according to reports from the Chicago Sun-Times. “They have pulled back from the ability to interdict . . . they don’t want to be a news story themselves, they don’t want their career ended early, and it’s having an impact.”

It is being called the “YouTube effect,” the fear that every single interaction is being captured by cell phone or other video, and may be dissected and therefore inaccurately characterize what actually occurred, leaving the officer facing a world of negativity.

“It’s impacting their judgment of whether they get out of the car or not. And that is having an impact,” Emanuel added. “You can’t otherwise explain why every city across the country, but a few, is experiencing a hockey stick as it relates to both shootings and homicides.”

In Chicago alone, shootings have jumped 40 percent, while homicides have increased more than 20 percent compared with rates from the same time frame last year. And it’s a problem being felt in numerous large cities across the country.

But not everyone agrees with Emanuel’s idea – or at least his choice of words.

“I don’t believe the description ‘fetal’ properly describes anyone working in law enforcement,” said Dean Angelo, president of Chicago’s Fraternal Order of Police. “That being said, I do believe that officers are well aware of being recorded. Members regularly relate to us that nearly every traffic and street stop are being recorded.”

Additionally, Angelo posed who – if not the non-proactive men and women of the Chicago Police Department – has been responsible for the removal of nearly 5,500 illegal guns from the streets this year alone?

“There’s no doubt Ferguson, Baltimore, New York, Cleveland, in my view, have put the genie out of the bottle,” Emanuel said. “Unless we deal with backing them up, the gang members know” police “are not putting their hands on them because they don’t want to be prosecuted, whether it be by public opinion or by the court.”