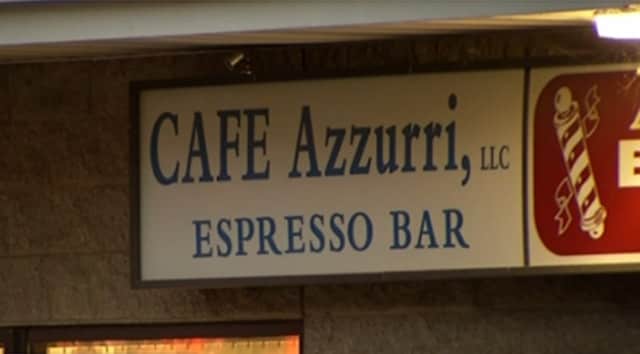 The coffee shop and cafe was back to business Monday, while employees remained unwilling to discuss the incident. (Photo: NBC Connecticut)

One man is dead after he tried to rob a cafe in Waterbury early Saturday morning, only to be met – and fatally shot – by an armed patron.

Witnesses said the suspect walked into Cafe Azzurri around 2:30 a.m., brandished a gun and demanded cash and valuables from the business and the customers. But one of the customers, who police say was carrying a legally registered handgun, intervened and stopped the robbery when he shot the suspect at least one time, according to reports from a local NBC affiliate.

When officers arrived on the scene, the suspect, who was later identified as Raphael Dillard, 26, was pronounced dead.

Authorities confiscated the handgun carried by the armed patron, 53-year-old Howard Williams, a former firefighter and bar owner, but said no charges have been filed at this time.

Reactions to the attempted robbery and fatal shooting have been mixed, with most of the cafe employees still shaken up over the incident and tight-lipped with the media as business appeared to be back to normal Monday.

However, Scott Wilson, president of the Connecticut Citizens Defense League, said in a statement that the act appears to have been an instance where innocent lives were saved thanks to the actions of of legally armed patron.

“Thankfully we do not have to find out what harm he might have inflicted on people at this establishment or with future criminal acts,” Wilson said of the dead suspect.

Wilson also added that defensive shootings across the country are becoming increasingly common and that he hopes such instances will force criminals to “start acting differently.”

But others didn’t seem so sure about Williams’ reaction to the armed robber.

“There’s a kid dead. I’m not really relieved about anything you know, if you want to know the truth,” said another customer, who did not wish to be identified.

The only thing the cafe employees had to say was that they had nothing to say.

The incident remains under investigation and Williams is said to be fully cooperating with authorities.