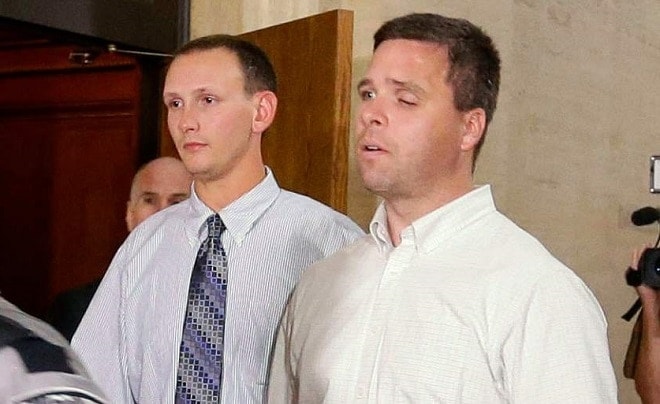 A jury on Tuesday decided in favor of two Milwaukee police officers who filed suit against a gun store for negligently selling a pistol to a straw buyer.

The suit stemmed from a 2009 sale by Badger Guns in Milwaukee in which the plaintiffs argued shop employees on duty looked past a number of red flags in the sale of a Taurus PT140 .40-caliber handgun that wound up in the hands of Julius Burton, 18, who used the pistol a month later in the shooting of then-officers Bryan Norberg and Graham Kunisch.

Both officers were shot in the face, forcing the medical retirement of Kunisch, who lost an eye and suffered brain damage.

In the civil hearing, held in a Wisconsin Circuit Court, the two officers pursued negligence allegations against Badger, their insurance company and store staff for damages after they sold the Taurus to Jacob Collins on behalf of Burton, who was not legally old enough under state law to purchase a handgun.

According to court documents, Collins filled out Bureau of Alcohol, Tobacco, Firearms and Explosives transaction forms that initially indicated the gun wasn’t for him. Shop employees then convinced Collins to change the form to indicate he was the buyer, as outlined in the suit. In all, Collins spent 40 minutes filling out paperwork, with Burton shown at his side in surveillance footage.

Burton, who is now serving 80 years in prison for the shooting, paid Collins $40 to purchase the gun for him as he legally could not buy it himself. Collins subsequently pleaded guilty on straw buyer charges in return for a two-year sentence.

Following a nine-hour deliberation, jurors ordered the store to pay Norberg $1.5 million, Kunisch $3.6 million and punitive damages of $730,000. The verdict applies only to Badger Guns as a corporation. The store has since changed names though still remains in the owner’s family.

“A responsible business owner would do more and everyone agreed on that from the start,” said Brett Heaton Juarez, the jury’s foreperson as reported by the Milwaukee Journal-Sentinel. “Gun dealers have to do more than what we saw in this instance.”

Although the federal Protection of Lawful Commerce in Arms Act allows for protection from civil suits to licensed firearms dealers and manufacturers, there are exceptions for transactions in which the seller knew or had reason to believe the transfer was in violation of the law.

For their part, Badger’s attorneys argued store employees had stopped buyers before who seemed suspicious and the store displayed signage warning about the legal ramifications of straw buyer activity.

“The counter from the place where people sit to fill out the forms … there was a poster on the wall. Same message telling customers trying to buy guns that there are serious consequences for buying a gun for another person,” Badger attorney James Vogts said during the hearing, unfolding a poster reading “Don’t Lie for the Other Guy.”

Further, they argued Collins should have been a prohibited purchaser due to a 2007 arrest, yet was cleared to receive the gun following a mandated Brady check.

The chief lawyer for the officers, Patrick O. Dunphy, told the jury during final arguments this week that store employees should have done more to prevent the sale.

“Badger Guns was supposed to be the public’s gatekeeper,” he said.

The suit, which was delayed for months over a snag caused by attorneys from the Brady Campaign to Prevent Gun Violence who posted information online about the case that was later ruled inadmissible, has been winding its way through the courts since 2010.

Still, the Brady group took a bow on news of the jury’s decision, calling the case a landmark ruling.

“This case should serve as a warning to all gun dealers who resort to irresponsible and unsafe business practices,” said Brady President Dan Gross in a statement. “You must be responsible corporate citizens or the Brady Center will hold you accountable.”

Vogts has promised an appeal in the case and a final judgement, of which the City of Milwaukee will share in compensation for medical and disability expenses incurred on the officers, will likely take years.