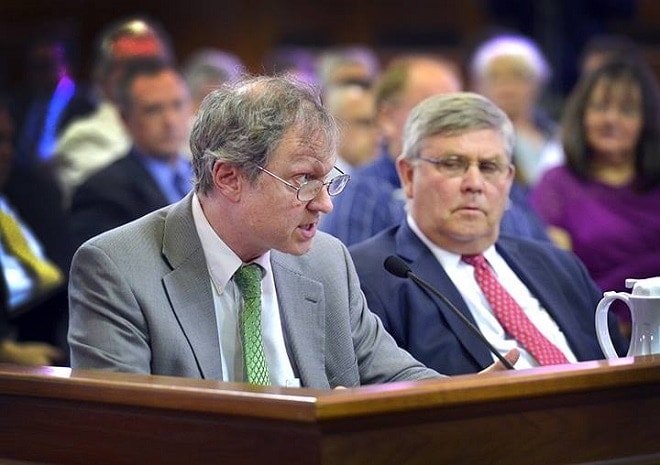 Dr. John Lott was on tap this week in the Michigan Senate to testify in favor of a bill by Sen. Mike Green, right, supporting concealed carry inside gun free zones. (Photo: Sen. Mike Green)

A pair of bills in the state Senate that would swap the current ability for permit holders to open carry in Michigan pistol free zones for the right to concealed carry, won approval in committee Tuesday.

The measures, which in the end the curious practice that permit holders could only carry if their weapon was visible and replace it with one in which CPL holders could apply for an exemption to the zones themselves. The bill passed the Senate Judiciary Committee in a 4-1 Republican-heavy vote.

“This legislation will allow more citizens the ability to protect themselves and their families in these areas,” said the sponsor of one of the measures, Republican Sen. Mike Green of Mayville.

The two bills, Green’s SB 442 and Majority Leader Arlan Meekhof’s SB 0561, allow for an exemption to gun free zones for permit holders who apply for and are granted an endorsement. This form of “enhanced carry” is in use in other states such as Mississippi where permit holders obtain additional training and then, after providing a certificate from a state-approved instructor, are granted an endorsement, which allows legal carry inside most places publicly posted as being gun-free.

However, if approved in its current form, open carry in those same areas would be prohibited.

On hand to testify on the gun free zone reform was Dr. John Lott of the Crime Prevention Research Center who argued that most mass shootings around the country take place in gun-free zones.

“The sign won’t deter them,” said Lott. “If anything it serves as a magnet because they know it’s relatively easier to go and attack people who are unarmed there.”

Opposing the measure was Don Wotruba, executive director of the Michigan Association of Schools Boards, who, while in favor of shutting the door on open carry inside gun free zones, doesn’t favor the endorsement system either, stating doing so would only hide a potential danger.

“We do not believe that student safety will be increased,” he said.

The measures now move to the full Senate for consideration.