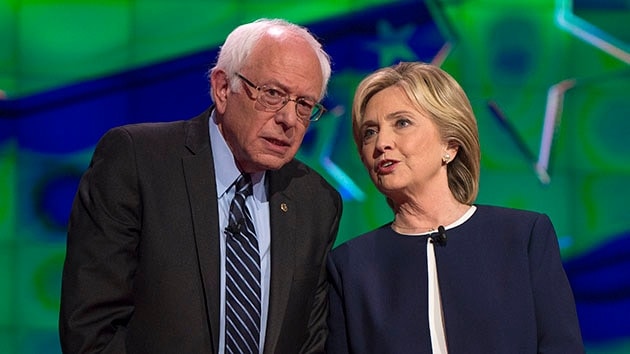 Bernie Sanders and Hillary Clinton chat during the photo spray at the first Democratic Presidential Debate of the 2016 campaign. (Photo: ZUMA)

Donald Trump wasn’t the only conservative tweeting during Tuesday night’s Democratic debate. The National Rifle Association, who was mentioned several times, got in on the Twitter action, lobbing lexical bombs on the candidates in kind.

The NRA claimed Martin O’Malley, as governor of Maryland, forced gun control on the state and “now he wants to come after the rest of America’s (Second Amendment) rights,” the gun lobbyist wrote.

O’Malley touted his gun control record during the debate, telling debate moderator Anderson Cooper the enemy he was proudest of making was the NRA.

“I proudly hold an F rating.” – @MartinOMalley. And we were happy to give it to you. You earned it. #demdebate

In May 2013, O’Malley signed a bill banning certain types of so-called “assault” weapons, limiting magazine capacity and requiring purchasers of handguns be fingerprinted.

The Firearm Safety Act of 2013 was meant to “reduce gun violence” and “save lives,” O’Malley said at the time. The law was upheld last year by a federal judge who ruled AR-15 and similar rifles “fall outside Second Amendment protection as dangerous and unusual arms.”

Maryland has statistically had one of the highest rates of homicide in the country – 70 percent of all homicides are committed with firearms – and in 2013 the state was in the top 10, according FactCheck.org, a project of the University of Pennsylvania’s Annenberg Public Policy Center.

Using FBI data for 2014, fact checkers also found that Maryland was one of five states with the highest rates of robberies committed with a firearm.

During Tuesday’s debate, O’Malley mentioned Sandy and Lonnie Phillips, whose 24-year-old daughter, Jessica Ghawi, was one of 12 people killed when a gunman opened fire during a midnight showing at a movie theater in Aurora, Colorado, in July 2012. The couple was ordered to pay more than $200,000 in court costs after losing their lawsuit brought against the gun shop and others who sold the weapons to the gunman. Following the order, the couple dropped their appeal, citing the expense of another potential loss.

O’Malley said the family lost “because of the way the NRA gets its way in our Congress and we take a back seat.”

The former governor vowed to cut the number of annual U.S. gun deaths – roughly 30,000 – in half by repealing the 2005 Protection of Lawful Commerce in Arms Act, which shields gun manufacturers and dealers from liability when firearms made or sold by them are used in the commission of a crime.

Bernie Sanders during the debate was forced to defend his position on the law, which he voted in favor of. The NRA, who heavily backed the passage of the law, gave Sanders a D- grade in November 2012. The highest grade Sanders has ever received from the gun lobby group was a C- in 2006.

“This was a large and complicated bill,” Sanders said, adding that he supported holding liable a manufacturer who legally sells a gun that is then later used in the commission of a crime.

“On the other hand,” Sanders said, when you have gun shops and manufacturers “knowingly” giving guns to criminals, “of course we should take action.”

Such was the case a decision handed down Tuesday in favor of two Milwaukee police officers injured by a gun negligently sold by firearms dealer Badger Guns to a straw purchaser in 2009.

The gun manufacture shield law didn’t protect the gun shop in this case because of a provision holding liable a seller in cases of negligence.

Hillary Clinton also attacked the gun group during the debate, saying, “It’s time the entire country stood against the NRA.”

Clinton, who received an F-rating from the NRA during her 2000 U.S. Senate race in New York, recently unveiled gun policy proposals, which include closing the so-called gun show loophole and the repeal of the gun manufacturer shield law.

Jim Webb, a highly decorated former Marine and former Secretary of the Navy was the only candidate on the dais to receive an A-rating from the NRA, an accolade he received during his 2006 Senate race.

Like Webb, former Rhode Island governor Lincoln Chafee was also a Republican in the past. He received an F-rating from the NRA in the 2010 governor’s race, according to the NRA’s Political Victory Fund database.