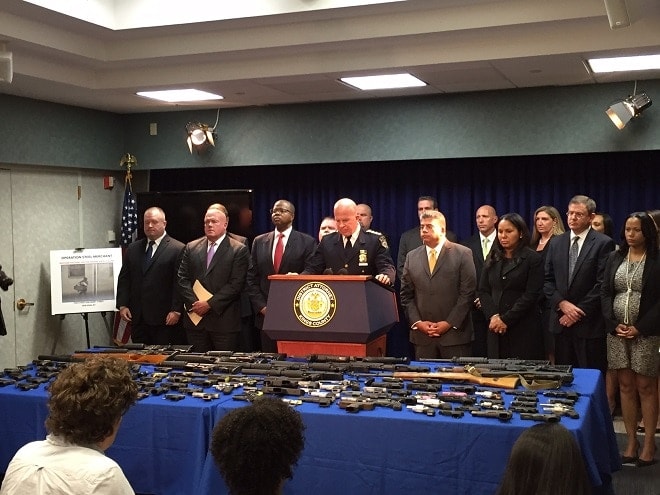 Shutting down an operation that funneled 112 guns from Pittsburgh and Atlanta into the city, authorities in Brooklyn announced a series of arrests and showed off a haul of firearms.

Brooklyn District Attorney Ken Thompson on Wednesday announced a 541-count indictment on a host of weapon and conspiracy charges against eight defendants who allegedly purchased numerous guns and, over the period of a year, sold them to undercover officers in Brooklyn.

Using Chinatown buses for transportation, the primary defendant, Michael Bassier, 31, the Canarsie section of Brooklyn, allegedly made a dozen trips to Atlanta and brought back several handguns on each return. Bassier also made shorter trips by car to Pittsburgh where he also picked up firearms for the underground market back in the Big Apple. He then in turn sold them to undercover New York Police detectives at a Walgreens parking lot on Rockaway Parkway in Canarsie.

“I commend the members of NYPD’s Firearms Investigations Unit, whose dedication to this dangerous long-term investigation not only prevented more than 100 firearms from reaching the streets of Brooklyn, but undoubtedly saved lives in the process,” said New York City Police Commissioner William J. Bratton in a statement.

Also charged was Willie Ware, 26, of Canarsie, and Anthony Jackson, 25, of Brooklyn who allegedly acted as Bassier’s brokers and lookouts in New York City, helping to set up deals with buyers.

Three defendants in Georgia and two in Pennsylvania, primarily women, were also indicted for their role as illegal straw buyers in those locations, picking up guns from pawn shops and gun stores as well as other sources which they then passed on to Bassier on his visits.

According to officials, guns would be acquired for typically between $150 to $300 by the straw buyers who would be reimbursed by Bassier who would then pay each illegal buyer a $50 finder’s fee per gun. In his exchanges with undercover detectives, Bassier then sold the firearms for as much as $1,200 apiece.

The majority of firearms were inexpensive guns such as Hi-Point, Bersa and Jimenez Arms models, along with a smattering of higher end firearms. Although displayed prominently in images released by the NYPD, four guns that appear to be suppressed 9mm UZIs are actually Walther/Umarex MP .22 caliber clones commonly sold with non-functional fake silencers.

District Attorney Thompson had harsh words for those who would traffic guns into the city. However in his remarks Thompson fixated on the Georgia connection without mentioning the illegal guns coming from Pittsburgh.

“These defendants conspired to use the lax gun laws down south and elsewhere to flood the streets of our city with assault weapons and other guns, which, in the wrong hands, could have caused mayhem and massive bloodshed in our communities,” said Thompson. “We will now hold these merchants of death accountable no matter where they live.”

As noted by authorities, Bassier faces 25 years if convicted of all charges while his co-conspirators face lesser punishments.