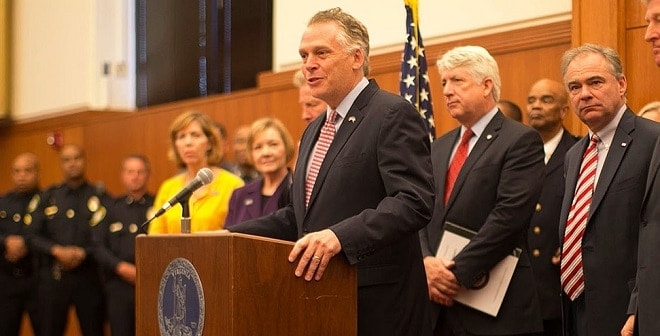 On Thursday, Gov. Terry McAuliffe (D) signed a multi-part executive order on guns that will, among other actions, prohibit firearms in many public buildings.

Although McAuliffe, who ran for office with the financial backing of former New York Mayor Michael Bloomberg, has repeatedly seen gun control proposals backed by his office fail in the state legislature, he contends his newest order will save lives.

“The actions directed in this executive order will help our Commonwealth better enforce Virginia laws designed to keep guns away from people who would use them for harm,” said McAuliffe in a statement. “We must continue to work to overcome political resistance to commonsense gun safety legislation, but in the mean time I am committed to using every power of my office to prevent senseless killings.”

The first will establish a Joint Task Force to Prosecute Gun Crimes, led by the state Attorney General, who will use existing laws to see, “That only licensed firearms dealers engage in the business of selling firearms,” and persons prohibited from owning firearms are prevented from obtaining them.

The second part of McAuliffe’s order will authorize the state AG to go after those potential offenders who make illegal gun sales in the state.

Next, a tip line would be established by the Virginia State Police for concerned citizens to call in suspected illegal sales and violations for which a reward system will be established.

The VSP will likewise pick up the additional task of tracing every gun used in the commission of a crime in the Commonwealth.

Fewer guns will be in circulation as McAuliffe’s order goes on to encourage judges and prosecutors to seek gun forfeitures immediately following both criminal sentencing and in domestic violence protective orders.

Finally, saying, “We must take every precaution to protect our citizens and state employees from gun violence,” McAuliffe declared that all state government buildings occupied by executive branch agencies are off limits for open carry and further ordered that within 30 days regulations to likewise ban concealed carry in the same spaces would be drawn up.

There will be exemptions for some law enforcement and security personnel.

“Working together, it is my hope that these initiatives will help reduce senseless gun violence in Virginia so that we may all feel more safe and secure living in our great Commonwealth,” said McAuliffe.