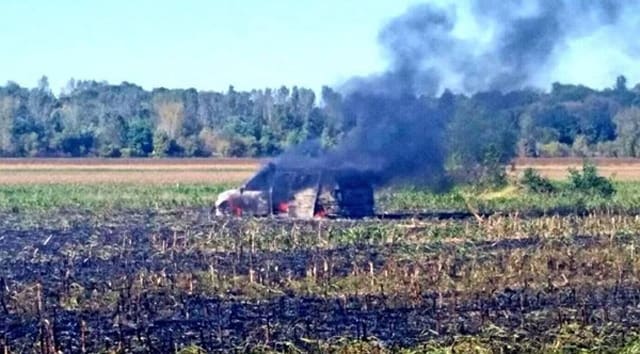 It’s a valuable lesson learned Tuesday by a Clay County, Kansas, man who attempted to extinguish a garbage fire in a field by driving over it in an ammo-filled van. Needless to say, the plan backfired. The van’s tires caught on fire, then, realizing that fire, ammo and a full tank of gas aren’t such a great combo, the man decided to exit the vehicle and get out of the line of fire.

At the time, a Clay County sheriff’s deputy was conducting a traffic stop when he noticed black smoke pouring in the sky and decided to follow it. Upon investigating – and hearing the ammunition ignite – the deputy found the van’s owner watching the blaze from afar. The deputy then called in the fire department, which handled the rest of the blaze.

The owner decided against filing a report, saying something about a possible insurance claim.

“It seems like he’s just going to have to take a loss on that vehicle because I don’t think they’re going to cover it,” said Jon Bazzano, spokesman for the Clay County Sheriff’s Office.

No one was reported to be injured during the incident.