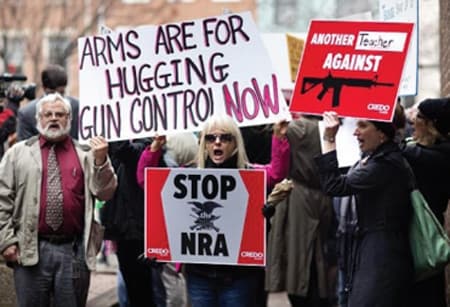 Controversy over Common Core is nothing new, but gun rights advocates are speaking out against an educator study guide called “The Battle Over Gun Control,” accusing the guide as being politically-driven and one-sided.

“Gun control is among the most divisive issues in American politics today,” the introduction reads. “For many, it boils down to a basic debate over priorities: the constitutional right to bear arms and protect oneself vs. an effort to reduce violence.”

According to the guide, which is actually meant to be a lesson in writing rather than guns or politics, Americans own more guns than any other country in the world, but the country is also plagued with the highest rate of gun violence among “wealthy” nations. Additionally, the United States has some of the loosest gun laws in the world, thanks in part to the “powerful political influence” of the National Rifle Association, the guide asserts.

“Interpreting the intent of the framers of the Constitution is at the heart of the gun control debate,” the guide continues, adding, “Gun rights advocates argue this clearly guarantees the universal right to bear arms. Gun control advocates, however, say it is a conditional right that should be strictly regulated in the interest of public safety.”

The guide then gives facts and statistics on gun ownership, gun-related deaths, the NRA, background checks and the gun show loophole, as well as gun laws and mass shootings.

Those who are opposed to the guide claim it is worded in such a way that will sway young minds that are sometimes easily-influenced. For example, referring to gun-control measures as “moderate” rather than using a more neutral term, such as simply “proposed legislation.”

The guide includes a plethora of resources for supplemental materials in teaching the lesson, and even provides Guiding Questions and Focus Questions. Some of those include:

Other questions focus on states with the highest and lowest homicide rates, states with the strictest and loosest gun laws, where it is legal for adults to carry concealed weapons, and again, gun ownership rates compared with other countries, as well as federal background check loopholes.

Alice Linahan, founder of the grassroots organization Voices Empower, told Fox News part of the problem she sees with such lessons. 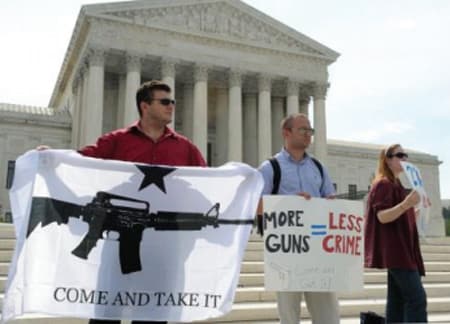 “Does a child get a job because they can read well, write well and have competent math skills, or do they get a job for supporting gay marriage and gun control?” she questioned.

However, those responsible for creating the study guide see nothing wrong with the wording, or anything else for that matter.

As long as the Elementary and Secondary Education Act, which provides school funding, is re-authorized, the study guide will continue to be used in schools across the country, said Linahan, who opposes the Act.

“What will be mandated in the act… will continue a shift in our education system,” she said.