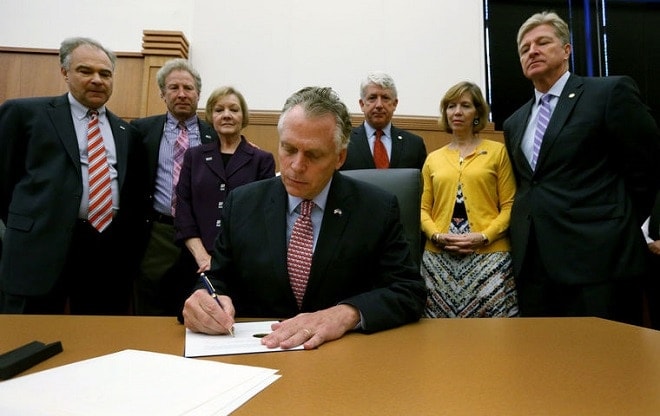 On Thursday, with gun violence survivors, U.S. Sen. Tim Kaine (D) and state director of the Coalition to Stop Gun Violence looking on, McAuliffe signed a multi-part executive order on guns that will, among a host of other actions, prohibit firearms in many public buildings.

Members of the Republican-controlled Virginia General Assembly, who have historically taken issue with Democrat McAuliffe’s gun policies, were quick to call out the governor.

“I think he is trampling on everyone’s rights,” said state Sen. Bill Carrico, R-Galax, as reported by the Bristol Herald Courier.

Noting that the governor is routinely escorted everywhere by armed state troopers, Carrico contends McAuliffe sees everyone as a danger, which translates into the apparent move to expand gun free zones in the state.

“He is putting my safety and others in jeopardy by prohibiting guns,” said Carrico, himself a retired Virginia State Police trooper.

Delegate Todd Gilbert went a step further and advised lawmakers will look at the governor’s new in the upcoming legislative session and “take appropriate action to protect the rights of law-abiding citizens.”

While state lawmakers disparaged the actions of the governor, those representing the state in Washington celebrated the move.

“We must keep families in our Commonwealth and the nation safe from gun violence,” said U.S. Rep. Don Beyer, a Democrat, in a statement. “This Executive Order will support our Attorney General and our law enforcement personnel as they take real, tangible steps toward curbing unnecessary gun violence.”

In addition to banning guns in some state-controlled buildings, the order establishes a Joint Task Force to Prosecute Gun Crimes, led by the state Attorney General, who will use existing laws to go after those potential offenders who make illegal gun sales in the state.

The National Rifle Association, which is headquartered in the state, told Guns.com what McAuliffe is actually doing with his new task force is something they have been advocating for years.

“The governor doesn’t need an Executive Order to enforce laws already on the books,” said NRA spokesman Lars Dalseide in an email. “It’s what the NRA has been calling for all along – for officials to enforce existing regulations and prosecute the criminal offenders to the full extent of the law.”

Present at McAuliffe’s side for the signing ceremony Thursday was Andy Parker and his wife Barbara Parker, parents of slain WDBJ-TV reporter Alison Parker.

To this Dalseide was frank. “If Governor McAuliffe and his former boss Hillary Clinton were serious about preventing tragedies like Virginia Tech and Roanoke instead of exploiting them, they’d address our nation’s broken mental health system – that’s the real loophole,” he said.