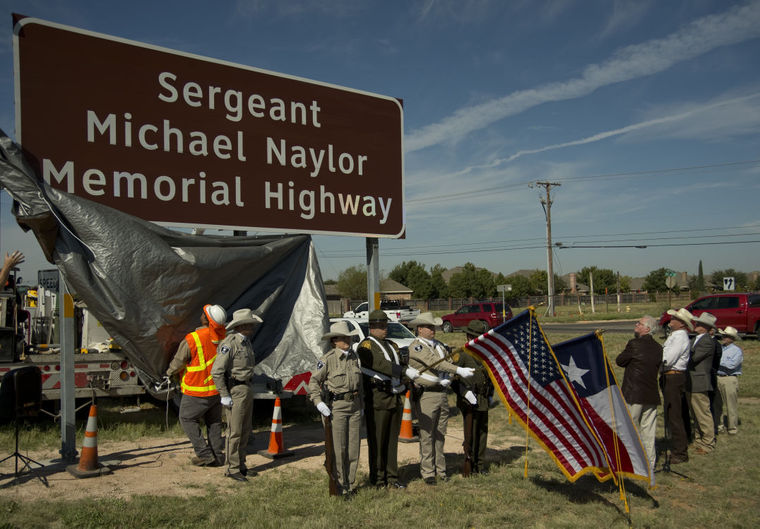 A small highway in West Texas serves as a reminder of the cost that violent crime can have on a community and that not even the officials sworn to protect them are immune from its violent grip.

For those driving home from work in Odessa to neighboring Midland, Highway 191 serves as a local relief route to the busy Interstate 20 a few miles south.

With the honors befitting a law enforcement veteran, the American and Texas flags were posted during a memorial event Thursday, renaming the highway in honor of Michael Naylor, who was killed while executing a search warrant for the Midland County Sheriff’s Department last year.

The 46-year-old sergeant and 13-year veteran deputy was fatally shot in early October 2014, becoming one in a string of 46 law enforcement deaths involving guns across the U.S. last year and among 466 killed with guns between 2005 and 2014, according to data released Monday by federal officials.

With 46 cop killings during that 10-year period, Texas leads the country in officer death by firearm.

For Midland County and many other communities across the Lone Star State, an oil boom bought in rich prospects. As early as three years ago, money started pouring in as the viscous, black gold was harvested from the soil. With that, the population boomed and property values increased.

“Motel prices went up, people were living in their vehicles, some RVs, camps sprung up all over the county,” said Midland County Sheriff Gary Painter in an interview with Guns.com. “We didn’t have enough apartments.”

Many who moved to Midland and Ector counties during that time did so looking to cash in on the sudden increase in job opportunity. With the workforce came the drugs.

Some of those who moved into the area couldn’t afford to live there. The oil industry turned away droves of applicants seeking to work the oil fields because they couldn’t pass drug tests. Inflated rent forced many of them to live on the streets. Property crimes soared.

Methamphetamine was Dan Higgins’ drug of choice. He was in a state of psychosis the afternoon he put a bullet in deputy Naylor’s head with a gun he had stolen from a home. Higgins pleaded guilty to capital murder and now serves life in prison.

The rash of crime was more than Painter and his force of 100 deputies could handle. Since the beginning of the oil boom, Painter’s 500-bed jail has been close to full.

“We’re trying to make due with what we got,” Painter said.

There is little chance of things changing if the drug problem and the mental health issues that come with it aren’t addressed, the sheriff said. The state legislature is making an attempt, but it isn’t enough.

“We need more help with mental health from the state and legislation is just the beginning,” Painter said.

The West Texas sheriff feels like federal background checks need to include mental health records. However, he said the federal government shouldn’t maintain a database because he doesn’t trust it with the information. States should maintain their own database of mental health records that the federal government can access on a secondary basis, Painter said.

Though the vessel by which Midland County’s drug problem sailed in on is far from unique in Texas, he feels the problem of gun violence in the country can be mitigated through a health care approach to treating the mentally ill. 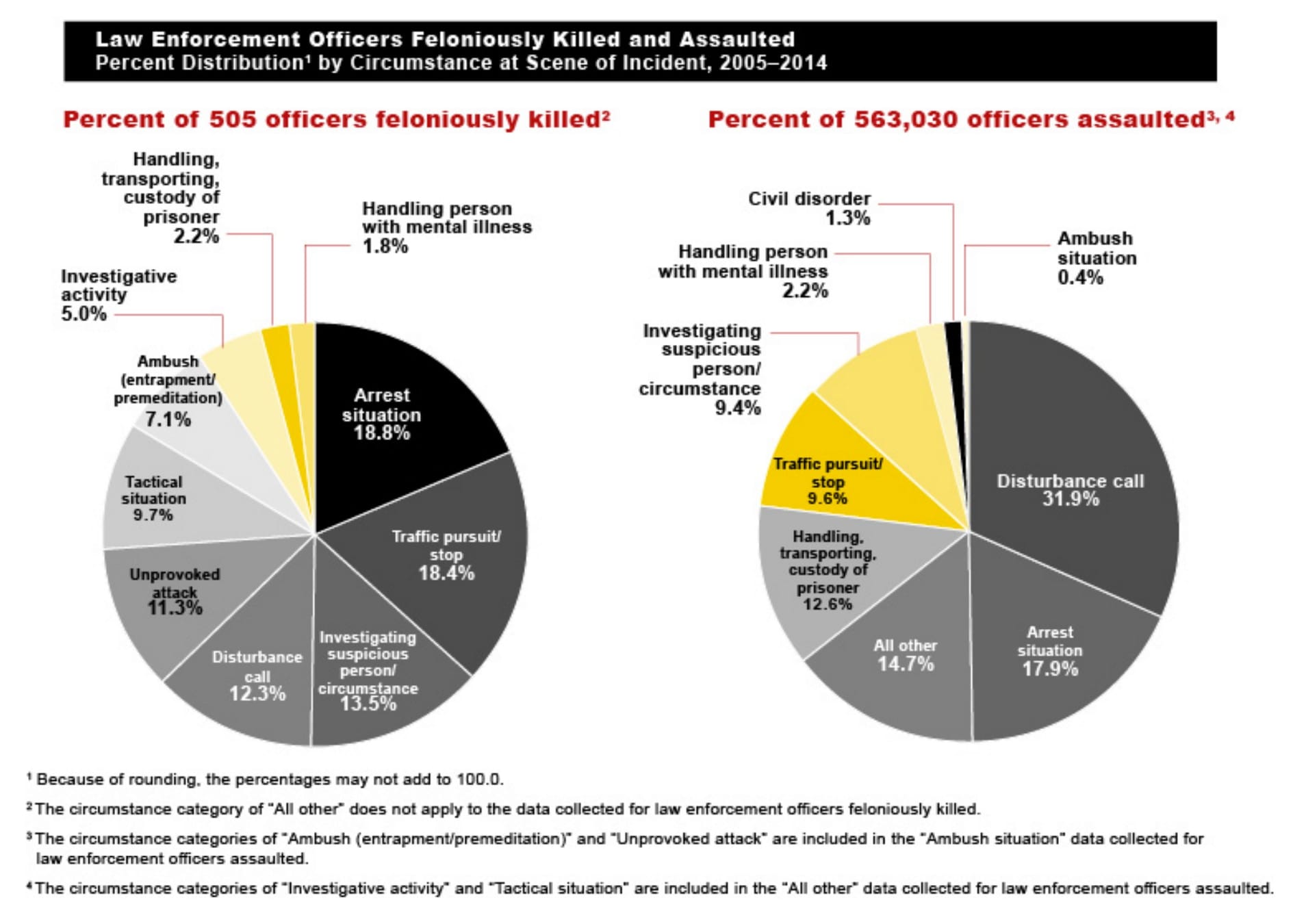 Fifty-one officers in 24 states and Puerto Rico were feloniously killed in 2014, compared to 27 the year before, the Federal Bureau of Investigation said. In total, 96 law enforcement agents were killed in the line of duty last year, 45 of which were the result of accidents.

Though there was an increase from one year to the next, officials said when comparing the numbers over 5 and 10 years, the data show there was a small, overall decrease in felonious deaths.

Forty-six of the 51 officers were killed with firearms — 33 of those cases involved handguns, 10 were committed with rifles and three with shotguns, the FBI said. In six of those incidents, the suspects used the officers own gun.

In total, 466 officers were killed by suspects armed with guns between 2005 and 2014, of which 343 of those slaying were carried out with handgun, 84 with rifles and 38 with shotguns. The most frequently used caliber handgun during the 10-year period was  9mm, followed by .40 caliber, then the .38 and .40 calibers, according to the FBI data. 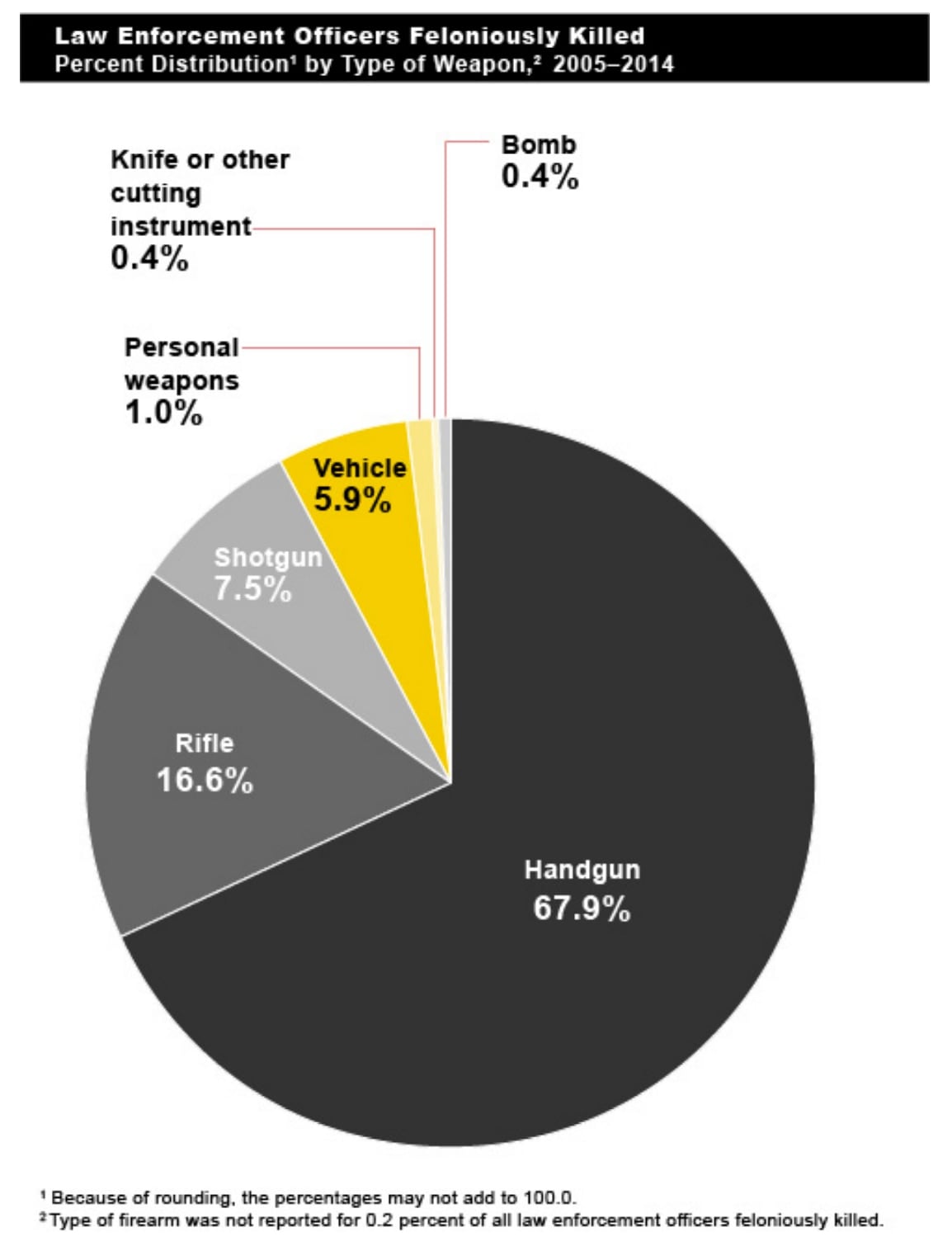 Of the 59 suspects involved in the officer slayings, 50 had prior criminal arrests and 11 were under judicial supervision at the time of the incidents. Of the alleged cop killers, 42 were white, 13 were black, two were American Indian or Alaskan Native, one was Asian or Pacific Islander and one suspect’s race was not reported.

Disturbance calls made up a majority of felonious officer deaths – there were 11. Nine officers were killed during traffic pursuits of stops; seven during ambushes; seven while investigating suspicious persons; five during active investigations; four during arrests; four the result of tactical operations; three while handling mentally ill persons and one during an unprovoked attack.