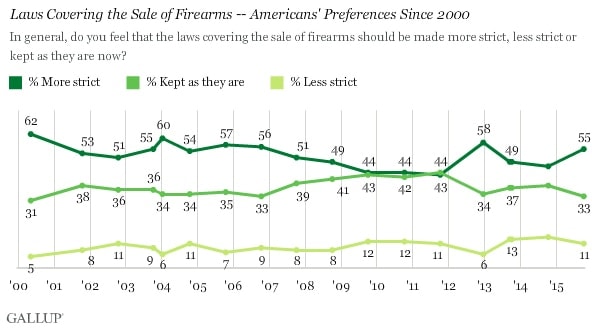 More than half of Americans said they want stricter laws regulating gun sales, according to a survey released by Gallup on Monday.

Fifty-five percent to be exact want stricter laws — that’s a rise of 8 percentage points from 2014 — whereas 33 percent said laws regulating how guns are sold should remain the same.

The Gallup Crime poll was conducted on Oct. 7-11, just days after the mass shooting at an Oregon community college in which 10 people were killed. However, that event seemed to have only affected views about laws on gun sales and not other topics related to guns, Gallup said.

Historically, opinions on guns fluctuate following horrific incidents along with a spike in firearm sales in the locale — the latter, however, is often attributed to fear of a repeat incident (read about it here, here, here).

The majority, 72 percent, of those polled said there should not be a ban on handgun possession. However, the majority of Americans — well above 50 percent — have felt that way since the early 1970s. 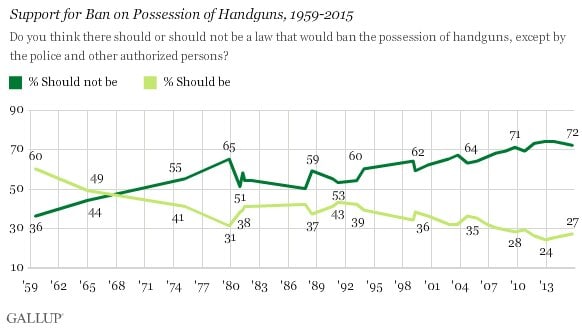 For the results, Gallup polled 1,015 Americans older than 18 years of age and from all 50 states and Washington, D.C. Interviews were conducted over the phone.

In June, Rasmussen Reports found that Americans prefer to live in neighborhoods where they can legally own guns over those areas they can’t. Some 68 percent said they felt safer in those areas of lawful gun ownership and 10 percent were undecided on the issue.