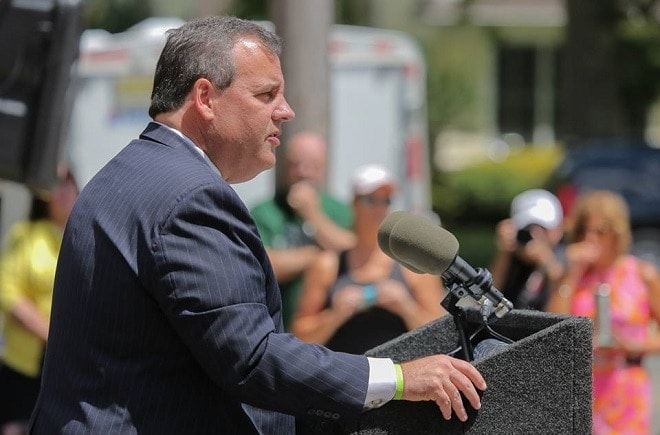 State Republicans are proposing a way out of a vicious fight between senate Democrats and Gov. Chris Christie over a veto he applied to a gun control bill. (Photo: Mykwain Gainey/NJ Governor’s Office)

The saga of a Democrat-led override of Gov. Christie’s veto on gun control legislation took a turn last week with the introduction of a Republican compromise bill.

The original bill, which would have added steps to those seeking to clear certain mental health records for the restoration of gun rights, passed the legislature by a unanimous bipartisan vote in August only to meet with Christie’s veto. The governor issued a conditional rejection of the bill, asking for 27 pages of mental health reforms to be blended into the proposal before he would sign it.

This didn’t sit well with the state’s top Democrat, state Senate President Stephen Sweeney, who pushed for a veto override vote in September that tanked when GOP lawmakers refused their support. Now, with Sweeny promising to send out the state police to bring in any absent lawmakers for another try at an override this week, Senate Minority Leader Tom Kean Jr. is offering a solution from across the aisle.

Late Friday, Kean announced he intended to combine the governor’s conditional veto message with an enhanced version of the original bill that aims to make those on both sides happy – and earn Christie’s signature.

“The only thing Steve Sweeney is interested in accomplishing today is grabbing a few politically expedient headlines,” said Kean in a statement. “He’s been setting the stage for a political dog and pony show for the last few weeks, while Senate Republicans have been working on finding a real compromise solution. I’m interested in getting people with mental health issues the help they need and preventing them from doing harm to others, not playing partisan games.”

While the text of Kean’s proposal isn’t available, Christie’s office fired off a rapid reply to the news of the compromise bill.

“The issue of mental health and its impact on violent, sometimes deadly behavior in our society is too important an issue to play politics with,” said Christie in a statement. “Yet, that’s exactly what the Senate President has done. Rather than looking for common ground, the Senate President has rejected bipartisan compromise out of hand and put his own political grandstanding and gubernatorial candidacy ahead of public safety and fixing the gaps that exist in our mental health system.”

Taking a break from calling out Sweeney, Christie said flatly that he would approve a bipartisan compromise measure.

“Senate Minority Leader Kean has set aside politics and is working on a bill that represents such an approach, including a commonsense path forward on the issue of the expungement of mental health records to enhance public safety. I support his efforts and I will sign his legislation when it reaches my desk,” said Christie.

In response, Sweeney attacked the governor for spending too much time on the campaign trail for a potential 2016 Republican presidential nomination.

“The governor was wrong when he vetoed the bill that gained unanimous, bipartisan support in the Legislature and he’s wrong again in endorsing a bill designed to be a smokescreen from the real issue of public safety,” said Sweeney in a statement Friday. “He should devote more time doing what’s right for New Jersey and less time trying to appeal to the extremist positions of Republican primary voters in other states.”

The senate Democratic leader went on to argue Kean’s compromise bill needs input from the mental health community before it could be acted on and the original measure would be brought back up for a potential veto override vote on Oct. 22.