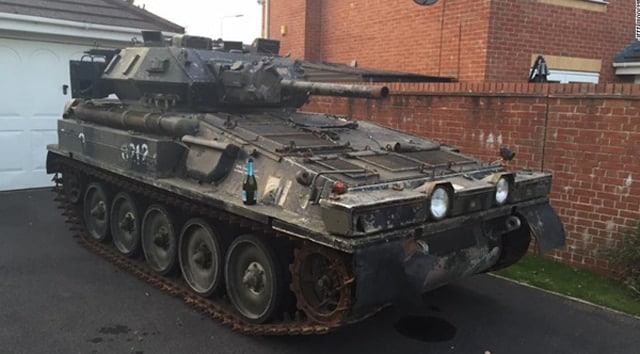 A British man living near Bristol had to find a new place to live after purchasing a seven-ton tank through an online auction only to realize he had no place to park it.

“I was living in a two-bedroom flat at the time, with an ensuite parking system. Unfortunately, tank parking permits were a no-go, so I had to buy a new house,” said Jeff Woolmer, the proud new owner of the tank once used by the Canadian military.

Woolmer, who bought the beast for a mere $14,000, said it was his first purchase of that kind, but also said the purchase wasn’t exactly intentional.

“It all started with a bit of office banter really. We were joking about how you can buy anything, including military vehicles, online these days. Then I got home one Monday and placed a bid on this tank,” Woolmer explained.

Woolmer said he was surprised when he received a phone call at the end of the week saying he had just bought a tank, but now he hopes to give the military vehicle a little much-needed TLC and eventually get it street legal, which is possible in the country with the proper paperwork.

But Woolmer isn’t so sure such paperwork is actually needed.

“You can drive it anywhere really,” he joked. “Who’s going to stop you?”

My new toy has been delivered :-)