Knowing your gun before the range 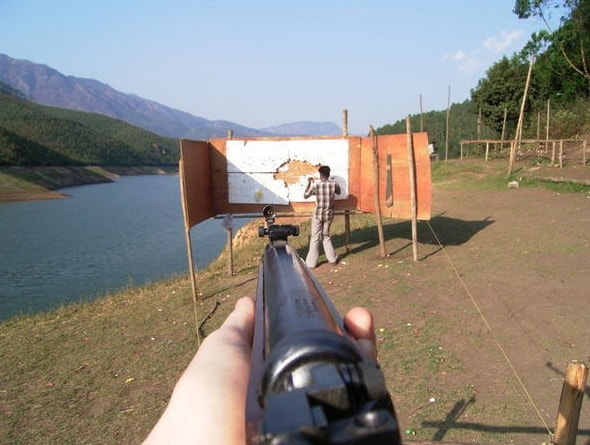 Never point a gun at anything, unless you intend to shoot it. Range safety rules are always important, especially for beginners. (Photo: TravelBlog.org)

Saying “Know your gun” probably sounds trite and like common knowledge to most of you reading this, but it’s a very important and scary subject. Instead of just spouting off why it’s important to know the weapon you are shooting, I’ll preface the reasons with a real story that happened to my wife and I at an outdoor range. It was freaking terrifying.

We had gone to a self-serve range in the local mountains one weekend while camping. By self-serve, I mean that you could just pull up and begin shooting whenever you wanted. There are no range masters or hosts at the range; it’s each man for himself, so to speak.

We had set up some paper targets and one of the steel spinning jobs, and were using pistols on a casual Saturday afternoon. We were the only ones there, which was a blessing on a weekend day, as those ranges can get quite busy.

A couple of hours into our shooting session, another vehicle pulled up and a group of adults exited. They spent some time preparing their firearms and yapping, and then they stepped up to shoot. Right next to us. This is bad form when there are only two others at the range, as you likely already know.

There were two men and two women, probably in their 50s. Nobody seemed to know a thing about the guns they were handling. I honestly wonder if it wasn’t their first time shooting at all, but I never did ask.

First up came a guy who said he had a 14-gauge shotgun (a 14 gauge!). Something went wrong and the shell didn’t load correctly, so he started fiddling with it and jerking things about. Well, it went off unexpectedly. Luckily, he had it pointed downrange and everyone had been wearing their ears.

My wife and I exchanged nervous glances and kept our eye on the group of shooters.

Next up was a lady with a pistol. She received a four-second instruction session from one of the men, who then stepped back and watched her aim. She kept pulling the trigger but nothing happened. As it turns out the safety was on.

This lady didn’t have a clue what she was doing, and nobody was helping her.

After her six finally left the muzzle, the second guy, who was using a revolver of some sort, began firing. At our targets. Now, I shouldn’t have to mention that not only is that rude, it’s dangerous as hell. Folks, if you go shooting somewhere like that, bring targets. Never, ever cross into someone else’s firing line, for any reason.

We immediately packed our stuff up and left without saying a word. We probably could have waited them out, because I didn’t think they were staying too long, but we felt more than a litte unsafe; it wasn’t worth the risk to stick around.

I got to thinking about that incident the other day, and figured it would make a great introduction to a general know your weapon write up. The following are things that should be rudimentary but apparently are not, at least to some people.

Ask questions! — Trust me, looking a little green for a second is well worth the mild embarrassment when it comes to shooting. We aren’t at the bowling alley, we are using firearms; if you don’t know something, please ask someone. Nobody will mind teaching you things that will keep everyone safer. You can bet on that.

Know where the safeties are — Get this information before you go out onto the range. If you are borrowing a gun from a range buddy, make sure he fills you in on the basics of the firearm. While it isn’t necessarily unsafe to have the safety on (see what I did there?), it lets everyone else on the range know that you are clueless about the weapon, and gives them ample cause to worry a bit. Also, it can be unsafe if you think the safety is on but it isn’t engaged. Things can get very real very quickly in that situation.

Know what to expect as far as recoil — This one isn’t just for the ladies, either. If someone hands you a weapon you haven’t shot before, eat some pride and ask how hard it kicks. I’m not only talking about a Smith & Wesson .500, either; inquire about the recoil of any gun you aren’t familiar with. Big, small, long, short, light, heavy or any combo.

Know how to load and unload the firearm — As absurd as it sounds, you need to know this. You might’ve shot dozens of rifles, but no pistols. Or vice versa. A 1911 .45 pistol loads completely differently from a Marlin .30-30 lever rifle. It is very important that you know how to safely load and unload the type of gun you’re firing. Again, this goes back to asking questions. Don’t feel like a fool because you don’t know every single thing about every type of gun ever manufactured. Besides, it’s fun learning about them, right?

Know how to chamber and clear a round — The 1911 and the Marlin lever gun used in the above example also chamber rounds completely differently from one another, and a revolver is different from either of them. With a revolver, it’s also important to ask whether the gun is single or double action. Semi-auto pistols have slides that must be racked; pistols have hammers; lever guns have levers; shotguns can have pumps, break barrels, and so on.

Also, just because a gun is ready to fire doesn’t mean it has to be fired. All guns come with provisions to get the round out of the chamber before firing, and they are all removed in different ways. Ask how it’s done on the firearm you are going to be using.

We have all seen the not-so-funny videos on YouTube where some yokel hands his girlfriend a large-caliber weapon and lets her go for it. We are supposed to laugh when the recoil knocks her over or the barrel of the gun flies back and knocks her out. It isn’t funny – not one bit. In fact, it can be deadly.

If you are lending a firearm to someone who has never shot it before, fill that person in on the basics. Take a few minutes to keep everyone safe and having fun. It feels good to teach someone new. Why risk scaring them away from the hobby forever?

This article originally ran on Guns.com as “The Importance of Knowing Your Gun (before the range)” on 12/11/2012 and has been edited for content.