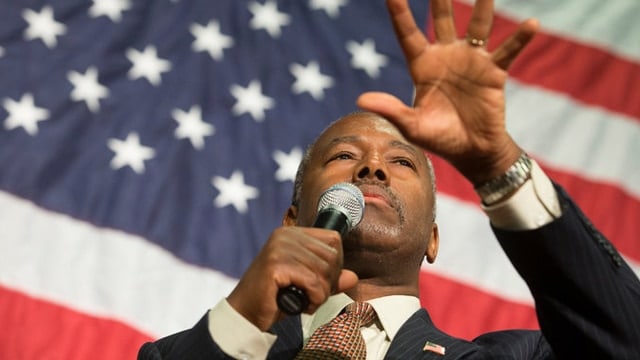 In the article “Why Ben Carson’s Nazi Analogies Matter,” conservative writer Peter Wehner argues conservatives should have rhetorical boundaries when rallying a base and he says politics isn’t meant to be a catharsis.

Along with being a contributing opinion writer for The New York Times, Wehner is a senior fellow at the Ethics and Public Policy Center who has served in the last three Republican administrations.

Like many other political autodidacts, Ben Carson has an odd obsession with Nazi Germany.

On several occasions, the pediatric-neurosurgeon-turned-Republican-presidential-candidate has compared the United States to the Third Reich. Mr. Carson has warned that a Hitler-like figure could rise in America. To understand what is happening in the Obama era, he recommended that people read “Mein Kampf.” And he won’t let go of the myth that the Holocaust would have been “greatly diminished” if Jews in Nazi Germany had been allowed to possess guns.

To declare the United States to be “very much like Nazi Germany” is a special kind of libel, yet Mr. Carson is clearly drawn to it. Part of the explanation may be that people who want to impress sometimes invoke imbecilic historical analogies, with the default one often being Nazi Germany. Some part of the answer has to do with his staggering ignorance when it comes to the unique malevolence of Hitler’s Germany. And for still others, it’s a way to convey alarm and mobilize supporters. In the case of Mr. Carson, it also appears to be based on the belief that progressive ideas share intellectual roots with fascism, with Nazism — the National Socialist German Workers’ Party — being an extreme version of progressivism.

Such rhetorical recklessness damages our political culture as well as conservatism, a philosophy that should be grounded in prudence, moderation and self-restraint. That doesn’t mean that conservatives should not use language that inspires people to act. But they should respect certain rhetorical boundaries. There are some places they shouldn’t go.

Read the full piece at The New York Times.