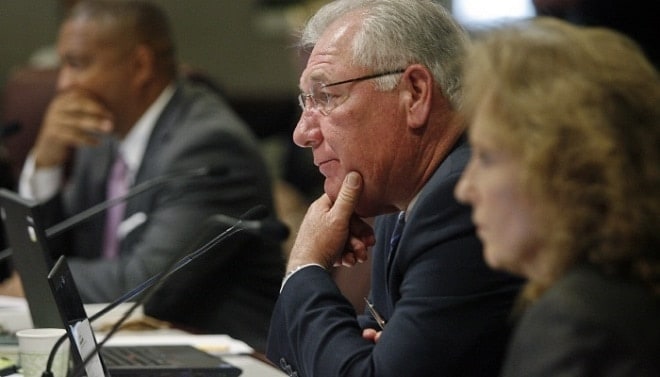 Proposed legislation that would allow for campus carry, strengthen Florida’s “stand your ground” laws and allow for open carry moved forward in the state Senate on Tuesday.

Supporters of the measures in the Republican-dominated chamber contend each is a vital reform to the state’s current gun laws.

“The reason you’ve got those three or four guns bills is because of issues that’s happened over the past several years,” said Sen. Greg Evers, R-Baker. “There’s a glitch for each one of those bills that really needs to be passed in order to give folks the ability to exercise their 2nd Amendment (right) and not be prosecuted for being a licensed-carry holder.”

Evers’s own proposed reform, SB 68, would delete the current prohibition against concealed firearms permit holders from carrying on the state’s public college and university campuses. Proposed in August, it has already passed the Criminal Justice Committee before rolling through a favorable 5-3 vote from the Higher Education Committee this week.

The committee saw emotional testimony from Shaina Lopez-Rivas, a student at Florida State University, who told the panel such a bill may have prevented a brutal on-campus rape she experienced.

“I can confidently say that if I had a gun I would not have been raped,” she said.

Next to advance was a SB 344, a bill enhancing protections under the state’s “stand your ground” laws which shifts the burden of proof to prosecutors, forcing them to establish beyond a reasonable doubt before going to trial that the defendant could not claim self-defense.

On hand to advocate against the proposal was Lucy McBath, mother of 17-year-old Jordan Davis who was fatally shot by Michael Dunn following a dispute over loud music. Dunn, 47, was later convicted of murder in a high-profile trial. Since the teen’s death, McBath has been a vocal challenger of stand your ground in the state.

“This adds an additional burden on the state to prove the innocence of the victims and the guilt of the shooters,” McBath told the panel, mentioning both her son and Trayvon Martin.

SB 344 passed the Criminal Justice Committee in a 4-1 vote.

The final measure to move forward in a 3-2 vote was SB 300, which would allow those with a valid concealed carry permit to openly carry firearms in the state. Florida is but one of five states in the nation to prohibit the practice altogether.

While the Fraternal Order of Police, Florida Retail Federation and Florida Chamber of Commerce are against the proposal, at least one law enforcement representative was on hand to speak in favor of the move.

Chamber Democrats downplayed the reasoning behind all of the measures.

Sen. Audrey Gibson, D-Jacksonville, challenged, “How do any of these bills reduce gun violence?”

Gibson cast dissenting votes against both the open carry and stand your ground reforms from her position on the Criminal Justice Committee.