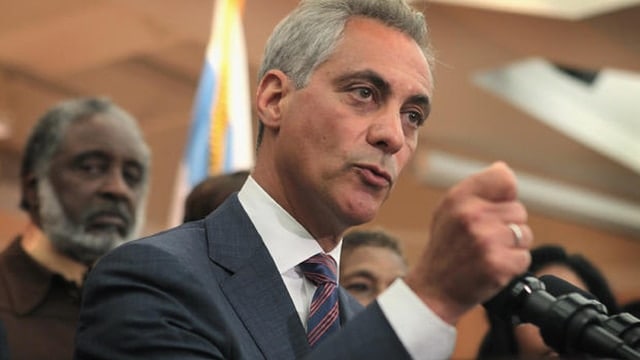 The group, Guns Save Life, located in Champaign, about 140 miles south of Chicago, aims to exploit the ineffectiveness of gun buybacks all to “help the cause of freedom” by selling off inoperable or damaged firearms, wrote John Boch, the group’s executive director, in his call to action.

“We’ll turn that scrap metal into Chicago taxpayer cash that we’ll use to help train and educate America’s next generation of gun owners. How is that for delicious irony?” he wrote. GSL held an identical effort in 2012.

The Chicago Sun-Times editorial board criticized the group for its plans to sabotage a largely symbolic gesture.

“Under a gun buyback program, police buy guns from people who bring them in, no questions asked. The hope is that a gun that otherwise might be used in a future crime is taken out of circulation,” the newspaper wrote.

“Unlike other measures designed to reduce gun violence, buyback programs ask nothing of gun owners who choose not to participate,” it continued. “No one has to fill out a form. No one’s name goes on a registry. No one has to wait an extra day to buy a gun.”

Rather than participating in a conversation on efforts to reduce gun violence in a city plagued by it, “the folks from Guns Save Life hope to make a joke of it,” the Sun-Times wrote.

Boch responded to the newspaper and argued that authorities should impose stiffer sentences for felonious gun offenders than symbolic gestures.

“The choice is ours to make. Prosecute and sentence violent offenders to long prison terms, or nibble around the edges with failed, feel-good symbolism that doesn’t work,” Boch wrote.

For a single gun, the buyback pays $100 gift card, and the money supporting the effort is taken from the Chicago Police Department’s budget.

“One of the things we did to redesign it is to work through our church leaders to make sure it’s exactly taking guns that we think need to get off the street off the streets,” Emanuel told reporters. “I know where I stand. I stand with the residents, yesterday as well as last night, who want to see police on the street and getting both guns and kids off the street.”