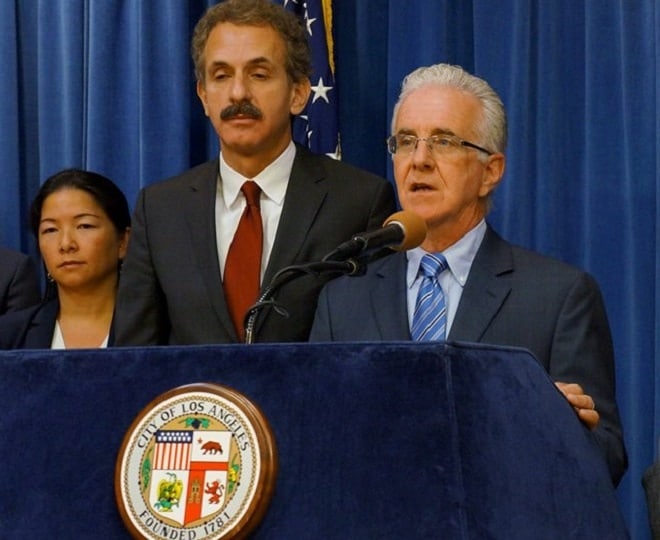 Mayor Eric Garcetti in August signed a citywide ordinance prohibiting the ownership of what the state deems large-capacity detachable firearm magazines – those capable of holding more than 10 cartridges.

The controversial measure, introduced by City Councilman Paul Krekorian, passed the council by unanimous vote and allowed for some exceptions for retention of pre-ban magazines by Hollywood prop masters, gunsmiths, museums and active law enforcement.

An amendment to the new law, introduced by Councilman Mitch Englander, moves to allow retired and reserve law enforcement officers to keep their magazines rather than turn them in, move them out of the city or sell them.

Both the Los Angeles Police Department and the Police Protective League told the Council’s Public Safety Committee, who passed the measure 3-1 this week, the exemption is needed for public safety.

Other speakers, from the Brady Campaign, Watts Gang Task Force and Women Against Gun Violence disagreed, calling it unnecessary.

A surprise opponent, City Attorney Mike Feuer, as reported by the LA Times, voiced concerns to the council that allowing the exemption for former law enforcement opens the city to a “significant legal risk” of potential litigation.

Indeed, gun rights advocates in the state have argued that such carve outs are a violation of the Constitution on 14th Amendment equal protection grounds, citing a 2002 precedent.

“The Ninth Circuit decided well over a decade ago that retired police officers are no different than retired plumbers for the purposes of gun laws,” Firearms Policy Coalition President Brandon Combs told Guns.com previously.

The FPC is currently pursuing litigation against the state over a recent repeal of carry rights on public school campuses in the state using the same grounds, among others.

In another 3-1 vote, the Public Safety Committee advanced a proposed ordinance by Krekorian that would mandate handguns not in use be disabled and locked in a secure container under threat of a $1,000 fine.

Calling unsecured firearms, the “overwhelming source of guns used in school shootings,” the Law Center to Prevent Gun Violence, a think tank that has long-advocated for California’s increasingly complex series of gun bans, endorsed the measure.

Gun industry trade groups and Second Amendment organizations have cautioned the council to tread lightly on the prospect of a mandatory locking requirement.

“NSSF [National Shooting Sports Foundation] does not believe that a city or state has the right to tell law-abiding gun owners the proper way to store their firearms. This should be an individual’s choice based upon his or her living arrangements,” reads a letter sent to the committee by the group. “The decision in District of Columbia v. Heller struck down storage requirements as being unconstitutional.”

Although San Francisco and Sunnyvale have adopted similar laws, they have been the subject of intense legal challenges from gun rights organizations.

Both measures will now continue on to the full council for consideration in coming weeks.