According to Gallup surveys released this week, the American public holds a favorable opinion of the National Rifle Association as well as legislation it staunchly opposes.

It’s unclear if the surveys were one in the same, but the questions were asked during phone interviews spanning Oct. 7 to Oct. 11, and both used a sample size of 1,015 Americans older than 18 years of age from all 50 states and Washington, D.C. Guns.com was unable to clarify details with Gallup in time for publication.

Gallup described possible contexts for the results, though. The interviews were conducted just days after a mass shooting at a community college outside Roseburg, Oregon, that left 10 people dead. 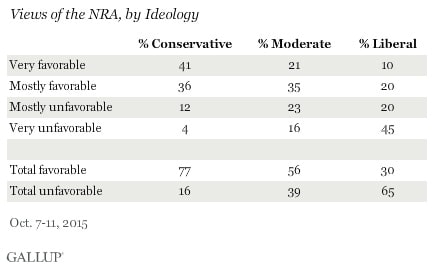 For the majority of the 26 years Gallup has recorded public opinion of the NRA, more than 50 percent of Americans have favored the gun lobby. In fact, following the Sandy Hook massacre in 2012 that left 20 first-graders and six educators dead, the NRA still had 54 percent of public approval.

However, opinions dipped below 50 percent in the mid 1990s, a pocket of time involving inflamed rhetoric and unfortunate events. In a 1995 fundraiser letter, the NRA called federal officers “jack booted government thugs” when discussing the standoff in Waco, Texas, two years before, Gallup said. Then a month after issuing the letter, negative opinions were compounded by the bombing of an Oklahoma City federal building and former President George H.W. Bush publicly resigning his lifetime NRA membership.

From the most recent survey, though, Gallup said there were more “very favorable” opinions than ever before with 26 percent saying so. 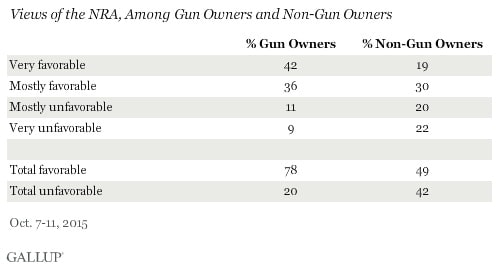 As for opinions on stricter gun sales laws, which Gallup questions more frequently, the percentage of Americans who want “more strict” laws has fluctuated from the mid 40s to low 60s since 2000 (an average of 52.6 percent wanting “more strict” laws).

Results published Monday showing 55 percent of Americans wanting stricter gun sales laws jumped 8 percentage points from 2014’s results. However, Gallup explained that the Oregon shooting seemed to have only affected views on gun sales and not other topics.