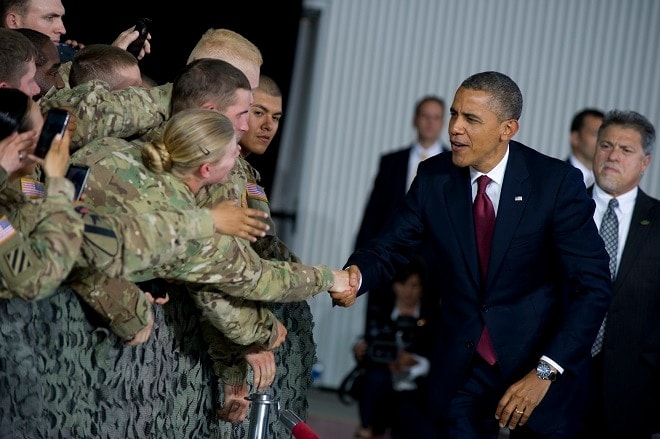 President Obama is set to veto the $612 billion NDAA policy measure, marking only the fifth time that has occurred since the Cuban Missile Crisis. (Photo: DOD)

Setting spending policy for $612 billion in funds for the Department of Defense, the “must-pass” bill pushed through the House earlier this month in a 270-156 vote and the Senate 70-27.

Keeping a promise made during its legislative debate, the President will veto the measure Oct. 22 in a ceremony at 3:45 p.m. and, in an unusual move for a rejection, has invited the media to witness the signing of his veto message.

Among the more than 600 amendments tacked on to the NDAA is a rider that would transfer the U.S. Army’s remaining stock of .45 ACP 1911A1 pistols to the Civilian Marksmanship Program and clear them for sale to the public.

Other pro-gun amendments include provisions that could allow greater leeway for troops to carry personal firearms while on base.

While Obama isn’t objecting to the amount of government funds outlined in the policy bill, he does have a problem with how they are being spent, specifically as alleviates pressure on the Pentagon from mandated sequestration cuts.

“With threats to our national security growing around the world, with our troops still in harm’s way in Afghanistan, Iraq and elsewhere, and with a clear bipartisan consensus in the United States Congress on the vital importance of this bill, it would be misguided and dangerous for the Commander-in-Chief to veto this legislation,” said Sen. John McCain, R-Ariz., the ranking member of the Senate Armed Services Committee, in a statement this week.

“In doing so, the President would not only reject his own budget request for national defense of $612 billion – which is the exact amount that is authorized – but also deny our troops the resources they need to defend the nation as we confront the most diverse and complex array of crises since the end of World War II,” said McCain.

The NDAA has only been vetoed four times since 1961.