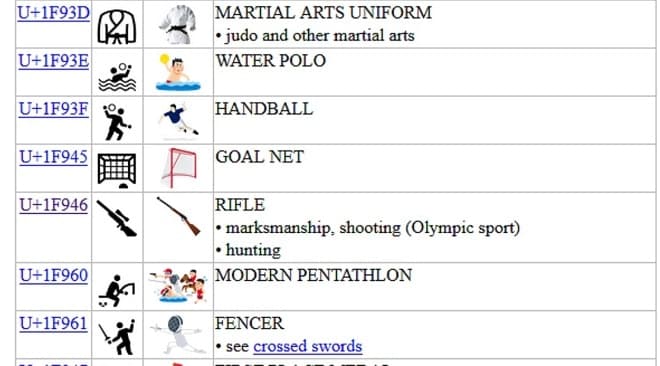 Despite a campaign backed by an anti-gun group in New York, the group that regulates smart phone emojis may be adding even more digital weapons.

In anticipation of the upcoming Olympics, the Unicode Consortium– the international committee whose job it is to standardizing various ideograms for use on mobile devices– is contemplating adding a host of sports-themed emojis as soon as 2016.

These include not only a rifle to denote marksmanship, but also a pistol-equipped pentathlete, fencers and both left and right-facing fists.

This comes amidst an ongoing “Disarm the iPhone” campaign by New Yorkers Against Gun Violence seeking to shame Apple CEO Tim Cook into pressing delete on the iPhone’s pistol emoticon.

“We realized that many Americans unknowingly carry a gun with them every day. The one that was given to them without a background check: the gun emoji,” reads an open letter from the gun control group earlier this year.

In a recent interview with the New York Times over any backlash on adding rifles to the digital armory, Unicode Consortium founder Mark Davis, who is also the chief internationalization architect at Google, was forward.

“Some people are bothered by the inclusion of the rifle as a candidate,” Mr. Davis said. “But the reason that’s included is because shooting is an Olympic sport.”

A Unicode committee will vote on the 67 pending emoji later this year.