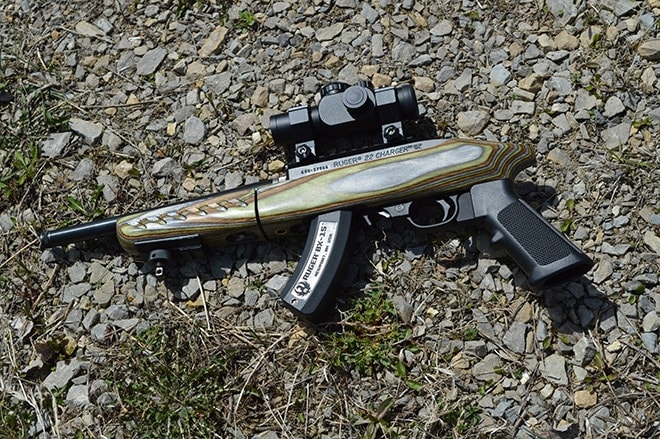 Sure, there will be naysayers given the title alone. Though I’d hesitate to pack “only” a 22LR caliber rifle when a larger caliber may surely be needed at some point for say, bears and meandering hoardes, this is one gun I want in my pack. Here are six reasons why the new, modular, threaded, Ruger Charger Takedown is the ultimate survival pack-gun.

1. Proven reliability of the action 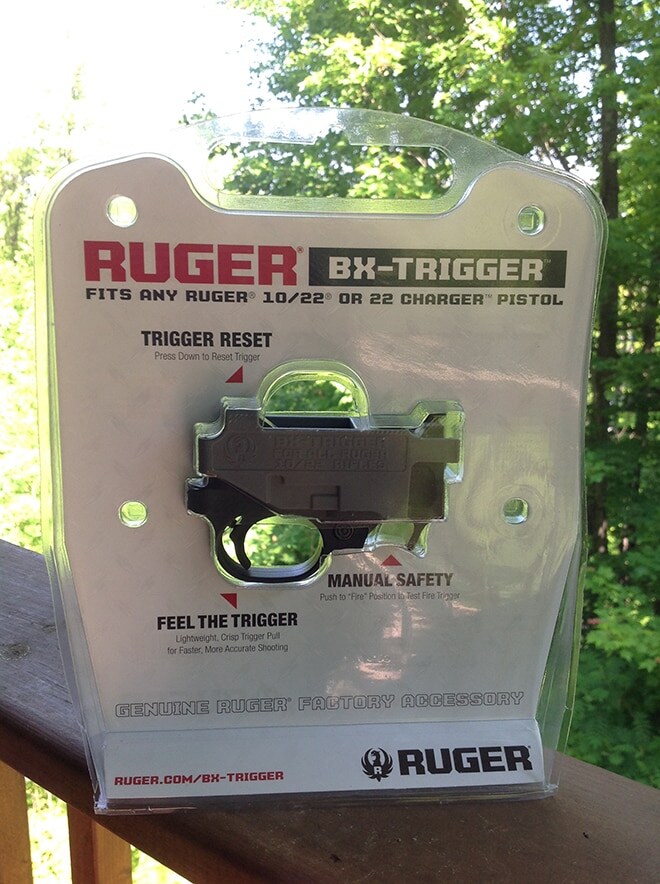 10/22. Not much more needs to be said. It has been one of the most reliable and relied-upon guns of all time. The ease of maintenance and repair is tantamount for survival weapons.

Teardown and cleaning any 10/22 is a snap without tools and the Takedown is no exception. There are not many parts floating around in that receiver, and should anything break, parts should be relatively easy to find or even easier to carry in spare. The laminate stock is heavy duty, if not beautiful.

Ruger has also just released a polymer option. The Charger Takedown gets my vote here for a number of reasons to be mentioned below, but substitute any of the 10/22 models without fault. 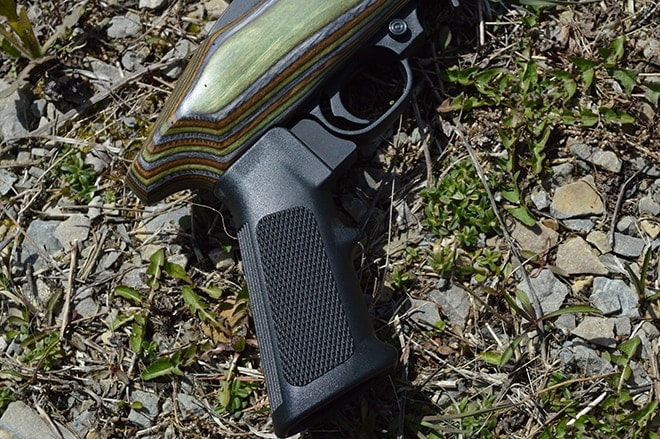 Perhaps the neatest thing about the new Ruger Charger Takedown is the transformer-like ability.

This gun is a chameleon. Break it in half, change the trigger group to the new BX, add any bipod or GripPod, mount a light, change the AR pistol grip to your favorite, thread a silencer or muzzle brake, place iron sights, red dots, or most anything you can dream.

Heck, who says you can’t get a SBR permit and drop it into a shoulder stock. You can tailor this gun to your own demands. 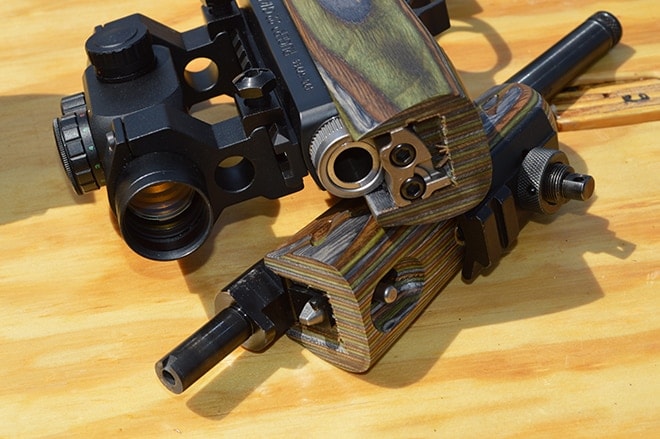 Weighing around 3 lbs, the Ruger Charger Takedown is easily packed when broken down. (Photo: Kristin Alberts)

Weighing just over three pounds and measuring just 18” long assembled and when broken down, both halves are no more than 10” long, the Ruger Charger Takedown is the ultimate in portability. And like the small-caliber guns, such is the ammo.

To those who argue against a rimfire that cannot be reasonably reloaded, I don’t think many people will be reloading on the survival lam with only a backpack and bigger concerns. Others will argue the Ruger Charger is strictly a bench gun—too big to carry and use and not accurate sans bench. I call foul. I’ve taken the Charger out squirrel hunting and leaned against trees or shot from sitting; I’ve shot varmints out the window or even on impromptu shooting sticks. The gun is as capable as you decide to make it. 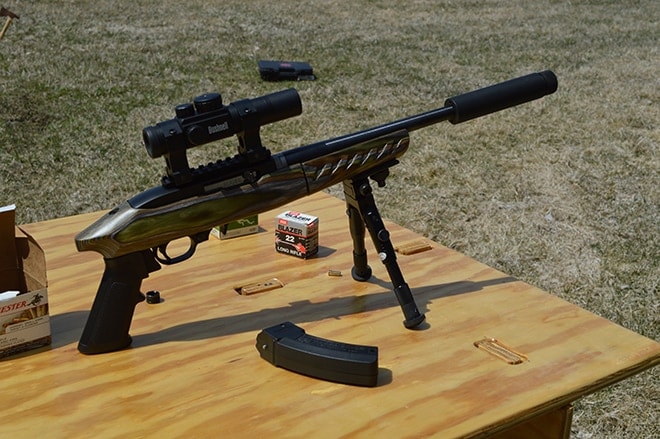 The combination of accuracy, fast follow-up shots and a suppressor could make you a ghost in the field. (Photo: Kristin Alberts)

Ruger 10/22 barreled actions are more accurate than most shooters. Taking a solid rest always helps, but any practiced shooter can shoot the Charger Takedown off hand well enough to harvest small game.

Though I do not recommend semi-automatic actions in most survival situations given the higher risk of malfunction and increased difficulty of repair, the 10/22 action is an exception to the rule. Taking down some small game? Or last-resort defense?

Enter the big plus: rapid follow up shots. The Charger comes standard with a 15-round BX mag. The Ruger BX25 is even sweeter, though standard 10-rounders work just fine as well and are even easier to pack. 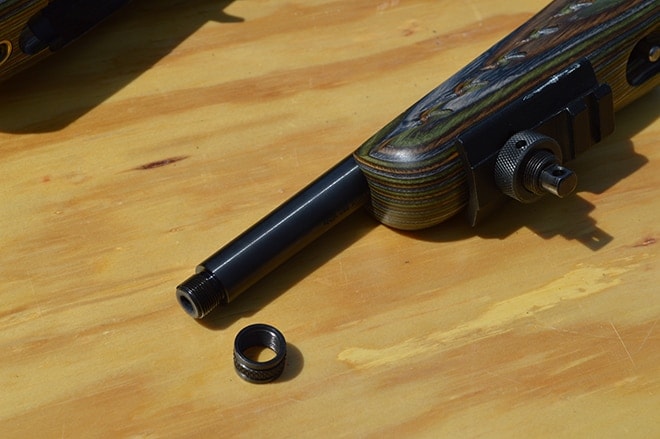 Whether or not you want it now, it sure is nice to have the option of mounting sound suppressing devices, though all legalities still apply. Even if silencers are not your thing, the threaded barrel of the Ruger Charger allows for muzzle brakes as well.

Though it retails for $409, the new Ruger Charger Takedown can be found at numerous online retailers around $300.

Conclusion: Pack it up

No, I don’t believe a .22 rimfire is adequate protection in every circumstance. I’d like to have a longer-range, higher-powered rifle backup or a backup sidearm for self-defense.

However, if you’re looking for something relatively light, packable, of a caliber that allows for large amounts of ammo, is accurate and reliable, the Ruger Charger Takedown is in the mix of any survival conversation. No matter the gun you choose, the best choice is preparation.