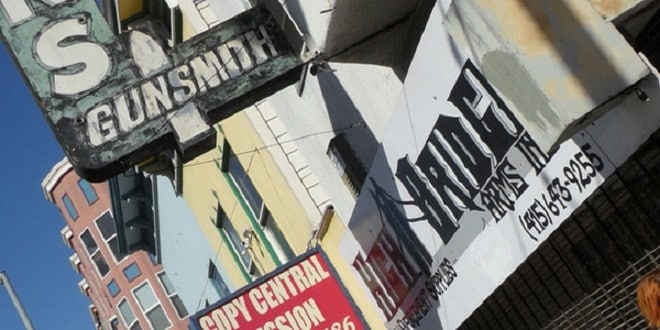 Misson Street’s High Bridge Arms has been a San Francisco fixture since the 1950s. (Photo: Yelp)

San Francisco city council members are unapologetic for the demise of an iconic gun store, the last in the city, over tough new restrictions. High Bridge Arms, founded in 1952 by Olympic competitor and shooting legend Bob Chow, is shutting its doors at the end of the month due in large part to a proposed series of new restrictions on gun shops in the city. As High Bridge is the sole such establishment, San Fran will be potentially the largest city in the country without a single (legal) gun store.

Even New York City has one (1), though it caters mainly to law enforcement customers.

High Bridge’s original owner, F. Robert Chow, known to history and friends as Bob, held 37 world pistol records at one time or another and represented the U.S. in the 1948 London Olympics.

As a Hollywood extra, he gave shooting lessons to the likes of John Wayne and Roy Rogers.

His custom 1911s, which have legions of avid fans both in the U.S. and abroad are now considered investment quality.

As reported by the San Francisco Examiner, the city approved the new legislation, proposed by Supervisor Mark Farrell, this week, but, as it takes effect after High Bridge’s closure, it will only regulate possible future stores.

Farrell had no apologies Wednesday for triggering the closure of the gun shop. Up until now, it had survived the increasing number of gun control regulations adopted by The City that had contributed to the closure of other gun shops.

“At the end of the day I would much rather see a preschool, a coffee shop, a senior center or some other neighborhood-serving entity that contributes to the vitality of our city in its place,” Farrell said. “If that’s the result of the legislation, as a city we are going to be better off for it.”

Supervisor Katy Tang agreed. “So be it if our last remaining shop closed down here in San Francisco,” Tang said. “I think that our city will be better for that.”