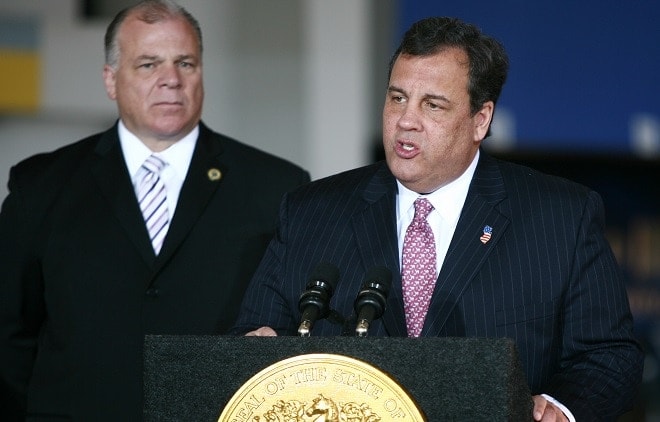 Senate President Stephen Sweeney, left, managed his first override of a veto by Gov. Chris Christie, but still needs a half dozen Republican swing votes in the Assembly to make it stick. (Photo: Governor’s Office/Tim Larsen)

A trio of GOP members crossed the aisle to cast their lot with New Jersey Senate Democrats to achieve a first ever override of Gov. Chris Christie’s vetoes.

With the minimum 27-12 vote Thursday, lawmakers are halfway to overcoming the governor’s veto ink but will need to pick up a further six Republican defections in the Assembly to make the override of S. 2360, which adds steps to those seeking to clear certain mental health records for the restoration of gun rights, official.

“It’s always a good day for New Jersey when elected officials put aside politics and do the right thing for the people,” Assembly Speaker Vincent Prieto, D-Hudson/Bergen, said in a statement. “That’s what happened in the Senate, and I look forward to it happening soon in the Assembly.”

While the measure passed through the legislature unanimously in August, following rejection from Christie support for the proposal became a partisan issue, with Republicans distancing themselves from a bill they once backed.

In the end, three Republicans on Thursday went against Christie: Joe Kyrillos, Christopher Connors and Christopher “Kip” Bateman, enabling a win for Senate President Stephen Sweeney, who had prior to this week failed 52 times to overturn the governor’s vetoes. Bateman, who was a co-sponsor of the bill when first introduced, was absent from the Senate in September when it came time for the first override vote, which failed.

Sweeney then took the drastic measure of threatening to send the state police out searching for unaccounted lawmakers to have a full chamber on hand for this week’s push.

The bill that has become a political line in the sand, S 2360, will require individuals looking to erase old mental records so that they could legally purchase firearms to first advise the Attorney General’s office, local county prosecutor, and state and local law enforcement of their efforts. Currently, law enforcement is not involved in the expungement process.

A Christie representative downplayed the move by the Senate, which is historic for a governor that has sustained nearly 400 legislative vetoes since taking office.

“The comprehensive reforms needed to truly address the gaps in our mental health system which directly affect public safety have sat untouched in the Legislature for years,” said spokesman Kevin Roberts. “This remains true today as the Legislature acts on a half measure.”

The bill now heads to the lower house where it will need to garner 54 votes out of 80 to override Christie’s conditional veto. While Democrats control the chamber, holding 48 seats, they still need nearly 20 percent of Assembly Republicans to defect in order to reach their goal.