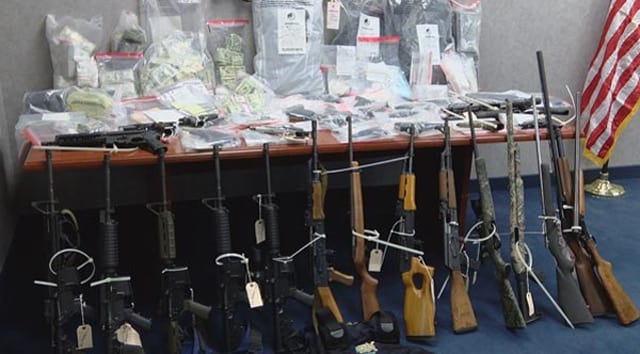 Authorities found 10 kilos of cocaine, over $750,000 in cash, a bulletproof vest, ammunition, and more than 40 firearms, including nearly a dozen assault rifles. (Photo: Department of Justice)

Authorities executing numerous search warrants arrested 19 individuals and confiscated a large cache of weapons, drugs and cash in South Carolina, breaking up part of what is believed to be a large-scale drug trafficking operation.

According to a press release published by the Department of Justice on Wednesday, altogether seventeen search warrants were executed this week, turning up 10 kilograms of cocaine, more than $750,000 in cash, numerous vehicles, a bulletproof vest, ammunition, and over forty firearms, including nearly a dozen assault rifles.

The suspects were cited for conspiring to distribute cocaine through Lexington, Saluda, Sumter, Richland, and Lee Counties, but believe the drugs were funneled in through Atlanta from a much larger operation tied to Mexican cartels, who brought the drugs into the country using tractor trailers.

The arrests were the result of months of investigations and coordinated efforts between local, state and federal authorities specifically aimed at targeting street gangs and dismantling the source of the area’s cocaine supply.

“If we are going to effectively fight violent crime and gangs, we must seek to curtail illegal drugs, the fuel that powers these gangs,” said United States Attorney Bill Nettles. “In order to do this, the law enforcement community must stand together and present a unified front, seamlessly sharing information and each department undertaking the tasks that they are best prepared to address. This case is a sterling example of that type of teamwork.”

Nettles noted that many of the rural areas are “hit particularly hard” and do not always necessarily have the resources to take on the problem alone.

“We at the United States Attorney’s Office have a special soft spot in our heart for the rural areas,” Nettles said. “And so we’re willing to partner with rural areas as much as we can in order to help fill the void.”

The following individuals were arrested and face numerous charges.