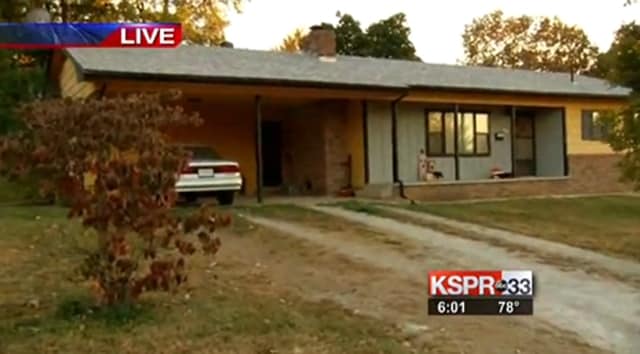 Authorities believe the father and son are responsible for about a dozen recent burglaries in the area. (Photo: ABC 33)

A man who was shot over the weekend after breaking into a West Plains, Missouri, home is fighting for his life, while his father is behind bars after their weekend crime spree came to an abrupt end.

According to reports from a local ABC affiliate, the duo broke into the home early Sunday morning and held a grandmother at gunpoint as they attempted to burglarize her home, but her grandson intervened and shot the son, who was later identified as Christopher Irwin. The grandson, whose name has not been released, then called 911, and Irwin was transported to the hospital where he remains in critical condition.

A short time later, police found Irwin’s father, Jeremy Irwin, at a nearby hotel where he was arrested. A search of the hotel room turned up numerous stolen items, as well as drugs and a loaded syringe. He was also found to be driving a stolen car.

Authorities discovered that before breaking into the home, the father and son, who are from Indiana, went through the neighborhood breaking into cars and other homes. The two are believed to be responsible for about a dozen burglaries in the area.

“It’s still kind of surreal,” said Kevin Gorskey, who realized after the shooting that someone broke into his and his wife’s vehicles and stole a laptop, iPhone, camera and other valuables, which were eventually returned.

Gorskey, who has an 8-year-old daughter, called the situation aggravating. He added that from now on he is going to be sure he is armed, but hopes the shooting will make other criminals think twice before coming into the area again.

“You hate to have to live in an area that you feel that way,” Gorskey said. “But if it can happen here, it’s going to happen anywhere.”

Desirea Legler, who lives next door to where the shooting occurred, agreed with Gorskey and said the entire ordeal was just horrible.

“I mean, it was an old lady that was getting attacked,” she said. “And that’s pretty sad, that you have to go to that level and attack an old lady for money.”

Legler, who is the mother of five boys, discovered after the shooting that her vehicle had been broken into as well, but nothing was taken. She said the situation just reinforces the need to teach your kids right from wrong.