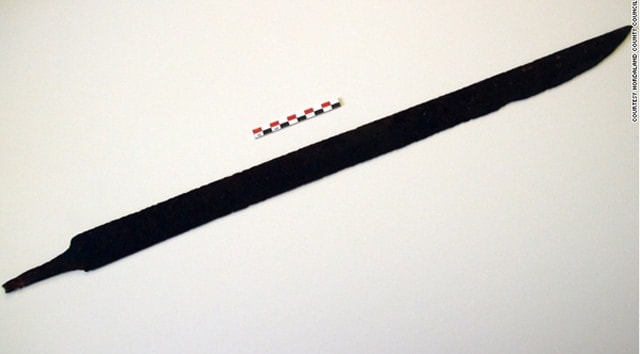 A man hiking in Haukeli, Norway, recently stumbled across what was described as a “quite extraordinary” yet unusual find: A Viking sword dating back to approximately 750 A.D.

Goran Olsen, who discovered the sword on a popular walking path about 150 miles outside of the country’s capital, said the rusty piece was simply lying underneath some rocks when he found it. Hordaland County Conservator Per Morten Ekerhovd said the 30-inch sword, which is made of wrought iron but now missing its handle, is in very good condition.

“It’s quite unusual to find remnants from the Viking age that are so well-preserved,” Ekerhovd told CNN, noting that, if it was sharpened, the sword could probably still be used. Ekerhovd explained that the area’s average six months of snow cover coupled with the lack of summer humidity likely contributed to the sword’s exceptional preservation.

“We are really happy that this person found the sword and gave it to us,” said Ekerhovd. “It will shed light on our early history. It’s a very (important) example of the Viking age.”

Ekerhovd believes the sword could have either been dropped by a traveler who died while going through the mountain pass or been lying atop some sort of burial site. He also speculated that the sword could have belonged to a wealthy individual, noting the high cost of extracting iron during that time and the history of swords as a symbol of status.

A research expedition is planned for spring and meanwhile, the sword is in the hands of the University Museum of Bergen where it will be undergoing preservation work.