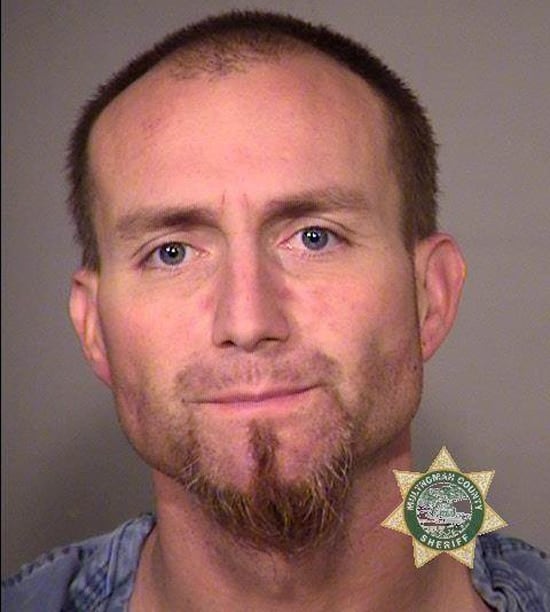 After the unusual home invasion, Richard Dean Defeudis was transported to the hospital for a drug-related issue. (Photo: MCSO)

A 32-year-old man is facing several charges after he broke into a Portland home early Thursday morning, took off all of his clothes and climbed into the couple’s bed, only to be chased away by the gun-toting homeowner.

Police say Richard Dean Defeudis forced his way into the home around 3:40 a.m., gathered up some valuables from around the house before removing his clothes. The male homeowner said he woke up to find the intruder holding a knife over him when Defeudis tried to kiss him, according to reports from Oregon Live.

The homeowner, whose name has not been released, pushed Defeudis off of him and quickly grabbed a gun while proceeding to yell at the strange man. Defeudis, in turn, grabbed his pants and pulled them on as he ran out of the home with the homeowner chasing behind him.

Police said the homeowner fired a total of three shots, but Defeudis was not struck by any of the bullets, and he continued to run away, finally stopping at another home, which police say was vacant, where he broke in and stayed.

When authorities located Defeudis at the second home, he was transported to a local hospital for treatment relating to what was believed to be a drug-related issue. Once released, Defeudis was taken to the Multnomah County jail where he now faces charges for first-degree burglary, second-degree burglary, first-degree sex abuse, and unlawful use of a weapon.

No one was injured during the incident and the homeowner, who is not expected to face any charges, is said to be cooperating with authorities.

Neighbor Kevin Gilliam, who has lived in the area for about a year, said he didn’t think crime was a problem when he moved there, but has since heard gunshots on several occasions and his vehicle was broken into just two weeks ago. He said he is now second-guessing his decision to move there and is considering another move to a high-rise, which he believes would be a more difficult target for criminals looking to break into a home.