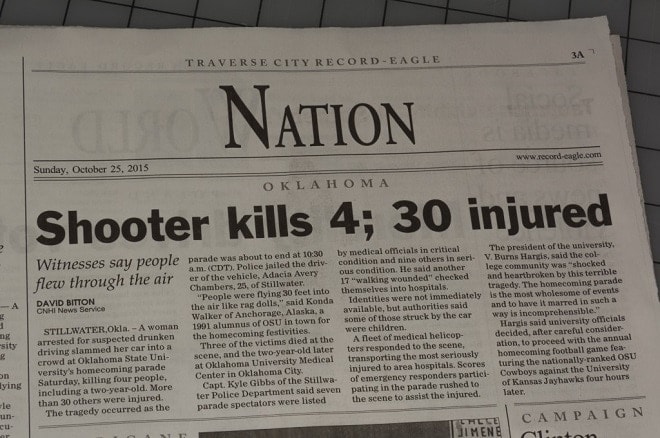 Cars can be dangerous. And by cars we mean guns, right? At least in Traverse City.

On Saturday a woman plowed her car into a crowd at the Oklahoma State University homecoming parade, killing 4 and injuring 30– but it lead in one paper as a shooting.

While the copy of the article, published in the Sunday edition of the Traverse City Record-Eagle, covers the story in great detail which clearly outlines the tragedy occurred at the hands of a suspected drunken 25-year-old woman at the wheel of a car that sent people “flying 30 feet into the air like rag dolls” the headline chalked the event up to something more polarizing.

In a clarification posted online Sunday afternoon, the paper cleared the record.

“Because of a page designer’s error, a misleading headline appeared on page 3A in Sunday’s Record-Eagle accompanying a story about a driver who struck and killed four people at the Oklahoma State University homecoming parade on Saturday.”

However, they did not make a comment advocating for tougher laws to bring about common sense drunk driver safety.