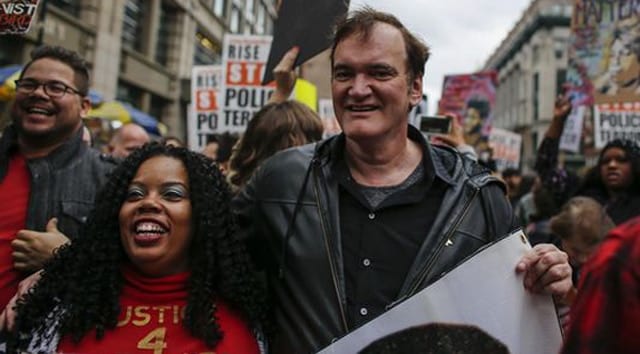 Some were really happy to see Quentin Tarantino at the rally. Others, not so much. (Photo: Kena Betancur / Getty Images)

Top law enforcement officials in New York are speaking out against Quentin Tarantino and the films he makes after the award-winning director attended a rally Sunday aimed at seeking justice for individuals killed at the hands of cops.

Hundreds of protesters gathered in Washington Square and marched several miles as part of the RiseUpOctober movement, which aims to be a voice against and put an end to “police terror.” Many in attendance held signs and told stories of their deceased loved ones. Tarantino, who is known for his graphic films involving story lines intertwined with an eclectic mix of extreme violence, gruesome murders and insouciant mayhem, flew from California to the Big Apple to walk side by side with protesters.

“I’m a human being with a conscience,” Tarantino told reporters. “And if you believe there’s murder going on then you need to rise up and stand up against it. I’m here to say I’m on the side of the murdered.”

And while some demonstrators were no doubt happy to have Tarantino by their sides, his gesture didn’t go over so well with Patrick Lynch, head of the Patrolmen’s Benevolent Association, or Police Commissioner Bill Bratton.

“It’s no surprise that someone who makes a living glorifying crime and violence is a cop-hater, too,” Lynch said in a statement. “The police officers that Quentin Tarantino calls ‘murderers’ aren’t living in one of his depraved big screen fantasies – they’re risking and sometimes sacrificing their lives to protect communities from real crime and mayhem.” 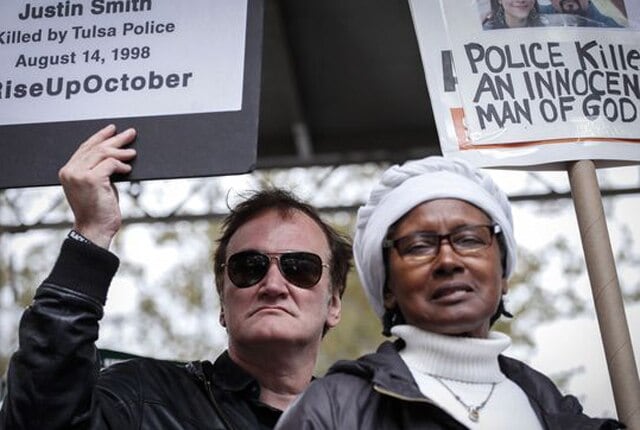 Quentin Tarantino walks side by side – and holds a sign – with fellow protesters. (Photo: Kena Betancur / Getty Images)

Lynch went on to urge New Yorkers to boycott Tarantino’s films. Bratton, although not as verbal as Lynch, was unhappy with Tarantino’s comments as well, namely suggesting that cops are “murderers.”

“Shame on him, particularly at this time, where we’re grieving the murder of a New York City police officer,” Bratton said. “Basically, there are no words to describe the contempt I have for him and his comments.”

Tarantino did not immediately respond to the comments.

Protesters came face to face with officers who were blocking a lane of traffic during their march, and although ugly gestures were made at law enforcement officers, the rally remained otherwise peaceful and no arrests were made.