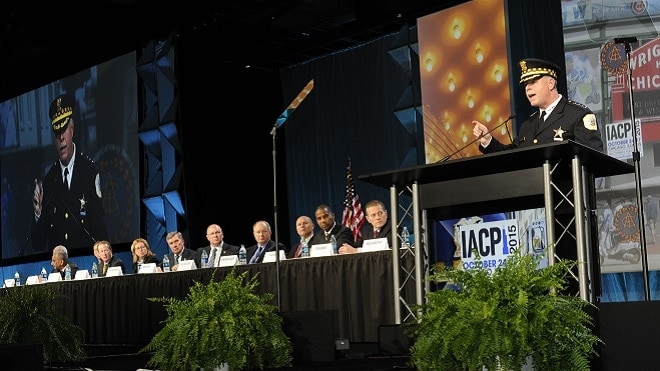 A coalition of police chief lobby groups meeting in Chicago this week are calling for background checks on all private gun sales.

The group, the National Law Enforcement Partnership to Prevent Gun Violence, made the announcement during an annual conference of police chiefs on the eve of a planned address to the organization by President Obama on Tuesday.

“America is in crisis because of gun violence. The longer we wait, the more people die,” said Baltimore County Police Chief Jim Johnson, who serves as chair for the gun violence group. “We’ve been rocked coast-to-coast from Charleston, South Carolina to Roseburg, Oregon. We keep seeing incident after incident unfold – from mass shootings to those that occur daily in our communities. This madness cannot continue. Enough is enough!”

The National Law Enforcement Partnership is formed from members of nine police leadership organizations including the Commission on Accreditation for Law Enforcement Agencies and the International Association of Chiefs of Police. The group’s statement of principles asserts it was formed “to address the pervasive nature of gun violence and its horrific impact on communities across America.”

The group made much the same call for expanded checks at its meeting last year in Orlando, while cautioning it is not anti-gun and that it has no problem with responsible lawful gun owners.

Arguing that guns used for crime in cities like Chicago and New York are coming from places with weaker gun purchase laws, the group wants to beef up the background check system to include more mental health records while extending the amount of time allowed to conduct checks.

“Last year, the FBI reported that more than 2,500 guns were sold to people who should have been barred but sales proceeded nevertheless,” Johnson said. “As the Charleston shooting rampage painfully shows, there are some cases where more time to investigate before a firearm is transferred would mean more lives saved.”

The conference this week in Chicago is being attended by 14,000 law enforcement leaders and President Obama is scheduled to address the audience Tuesday afternoon, which, according to IACP President, Richard M. Beary, will be the first time in over 20 years that a sitting president has done so.

Meanwhile, protesters associated with the “Black Lives Matter” movement have been assembling outside of the conference at McCormick Place to bring attention to police brutality.