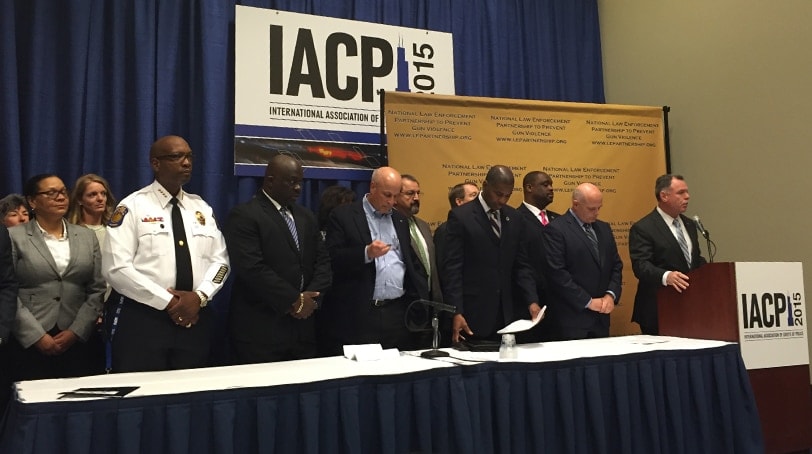 President Obama is expected to call for stronger background checks on gun sales Tuesday afternoon at the International Association of Chiefs of Police at Chicago’s McCormick Place.

His speech follows a push by law enforcement officials Monday, when speakers with the National Law Enforcement Partnership to Prevent Gun Violence threw their full support behind such a measure and addressed the lingering question: why aren’t political leaders supporting it?

“We know the answer to that. Were those senators voting based on what their constituents wanted? At least some of those constituents wanted it. Probably the ones with the biggest pockets,” said Chicago Police Superintendent Gerry McCarthy about 2013’s Senate bill to expand background checks to include the private sale of firearms online and between strangers (it excluded family and friends). Known as the Manchin-Toomey Bill, it fell just five votes shy of advancing.

Reiterating past comments, McCarthy described Congress’s failure to address criminals’ easy access to illegal firearms and lax penalties for gun offenses as severely limiting law enforcement’s ability to combat gun crime, which perpetuates the problem of Chicago’s violence. He also identified the gun industry as the cause for the stalemate among lawmakers.

“One of the things I talk about constantly in the city of Chicago – because we take so many guns off the street … we’re drinking from the firehose. … We’re doing exactly what the gun manufacturers want, which is we are making them money,” McCarthy said. “As soon as we take the illegal gun off the street another one comes to fill it up because that demand exists and until such time that something happens outside of what we can do, don’t expect it to change yet you hold us accountable for it.”

In support of McCarthy’s point, Chuck Wexler, the executive director of the Police Executive Research Forum, said to a reporter asking about the politicization of guns: “You’re here in Chicago, which takes off more guns than Los Angeles and New York combined and you’re asking us what we should do? You’re asking the wrong people. We’re telling you what needs to be done.”

McCarthy said it’s up to the public to act, not just support, on efforts to advance legislation by contacting their representatives.

“I can only give you the facts and keep using the bully pulpit to point out the practical nature of what we’re talking about. It’s not up to me to legislate. It’s not up to any of us to legislate. It’s up to us to enforce the laws,” McCarthy said. “When those laws don’t reflect what the community wants than there’s a legislative process that needs to take place to fix that.”

Addressing the National Rifle Association, McCarthy said: “The influence of special interest? I can’t control that. What I can control is what we do in law enforcement and fixing the things that we can fix and have a voice for things that are right.”

Gregory Thomas, district attorney in Brooklyn, New York, and president of the National Organization of Black Law Enforcement Executives, pointed to polls of public opinion that also support the efforts.

“There is no more pressing problem facing the nation than the gun violence problem that is wreaking havoc in our communities. We all know what needs to be done. We need to expand background checks to all gun purchases because we know they work,” Thomas said. “Americans, including gun owners, overwhelming support background checks on all gun purchases. Poll after poll shows this for example.”