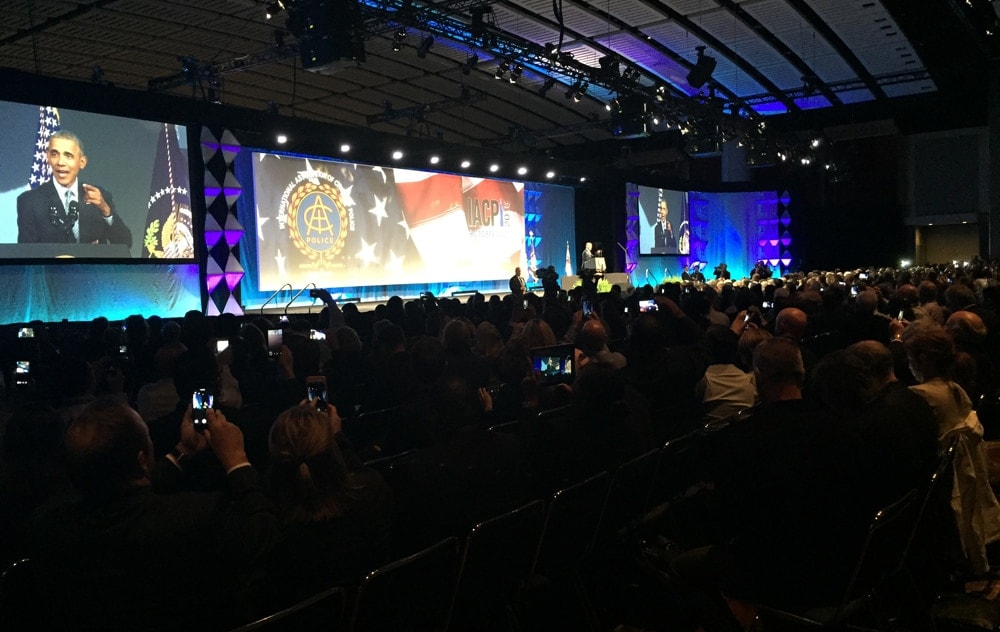 President Obama had a lot of fans, many of which took to filming him on their cellular phones and tablets. (Photo: Daniel Terrill/Guns.com)

President Obama listed national gun law reforms in his three-part plan to improve relations between police and the communities they serve when he addressed the International Association of Chiefs of Police at the group’s annual convention Tuesday in Chicago.

Throughout his speech, he identified nuanced issues at the root of conflicts between police and the communities they serve such as bias, racial disparity, poverty — much of which boils down to communication and understanding — but the last third of his roughly hour-long speech dealt with the complex role a firearm has in society as both a tool for protection and mayhem.

“They’re a powerful instrument. It helps you do a dangerous job. It’s something that has to be used with care. Many of you like millions of law abiding Americans are sportsman, hunters or you’ve got a firearm in your home for protection, but you also know the fact is it’s too easy for criminals to buy guns and that makes your already dangerous job far more dangerous than it should be. And it makes communities so fearful that it’s hard for them to be a good partner with you.”

He described an increase in stress among community members and police due of the fear of getting shot if they confront possibly armed individuals.

“It’s risky enough responding to a domestic violence call or a burglary in progress without having to wonder if the suspect is armed to the teeth — maybe he has better weapons than you do,” he said and added that in states with high gun ownership, police officers are three times more likely to be murdered than in states with low gun ownership. “You know more guns on the streets do not make you or your community safer,” he said.

He also addressed the oft cited Chicago gun-murder rate that’s used to criticize his policies. “The problem with that argument — as the Chicago Police Department will tell you — is that 60 percent of guns recovered in crimes come from out of state. You just gotta hop across the border.”

Using his examples, he said that’s why the country should follow the IACP’s lead and support expanding national criminal background checks and assault weapons ban for civilians. “They don’t need them,” he said and added, “It’s just a simple proposition: cops should not be out-armed by the criminals that they’re pursuing.”

He said he’s talked to too many families that have been hurt by gun violence — roughly 400,000 since Sept. 11, 2001 — a figure he asked the public to look into following a mass shooting in Oregon. “That’s like losing the entire population of Cleveland or Minneapolis over the past 14 years,” he said.

“I’m proud to be able to express to [victims’ families] that the entire country cares about them … but I have to tell you, and I know some of you have heard my frustration in the past here, when I meet with these families I can’t honestly tell them that our country is doing everything we could to keep this from happening again.”

Obama described his executive role as limited when it comes to gun violence, much like police leaders on Monday. “I’m going to keep calling on the folks in Congress to change the way that they think about gun safety. And if they don’t I’m going to keep calling on Americans to change the folks in Congress until they get it right.”