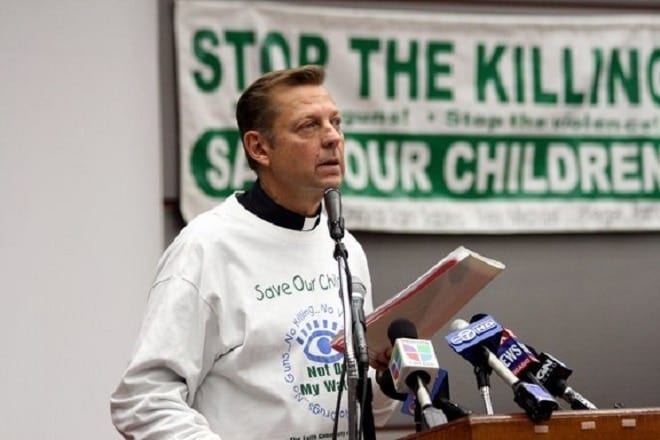 Father Michael Pfleger and others have been pressuring villages outside Chicago to increase restrictions on their local gun stores. (Photo: Facebook)

Following a suit from gun control advocates including the controversial Father Michael Pfleger, Lyons, Illinois approved a strict ordinance regulating how guns are sold in town.

In July, Lyons and two other suburban towns near Chicago found themselves ensnared in a suit filed by the Coalition of Safe Communities, Pfleger and others who sought to tighten laws that regulate operations of legal gun dealers in the area.

Citing that 12 percent of guns recovered in the Windy City came from stores in the three towns, the activists took the cities to task.

“We have begged the stores to just make sure they regulate themselves, but I guess the money is too tempting,” Pfleger said at the time. “Since they won’t regulate themselves we are now demanding the towns put in place the regulations.”

Which is exactly what Lyons did on Tuesday by passing an ordinance that would affect the city’s sole gun shop, Midwest Guns, in a number of ways.

As reported by local media, the shop will have to record anyone purchasing more than one gun per year, maintain video surveillance of the point of sale and submit to random inspections from authorities.

In addition to the new regs, uniformed police will step up patrols of the store itself in an effort to ward off potential criminal elements.

Mayor Christopher Getty expressed confidence that the suit would have been ultimately dismissed and cited the move by the Board of Trustees was one of civic duty.

“I just thought that if we were going to do it, let’s move forward,” said Getty. “This is a big issue. Let’s be the first to come out and take a position on it and stand together as a village.”

With the new law, Lyons is expected to depart the lawsuit while proceedings will continue against the two other villages, Riverdale and Lincolnwood.

“Lyons did the right thing, it’s now time for Chucks Gun Shop to step up and stop their poor practices of gun sales that are putting guns on the streets of Chicago,” said Pfleger in response to the news.