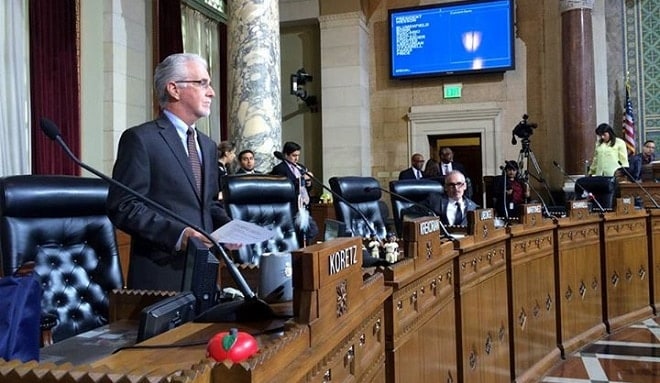 The Los Angeles City Council this week went all in to mandate that all handguns not in use be locked in a secure container under threat of a $1,000 fine.

The measure, introduced by City Councilman Paul Krekorian last year, was approved by a unanimous vote by the Council on Tuesday and will increase gun regulations over 3.8 million Angelenos if signed into law by Mayor Eric Garcetti.

“We had a broad degree of support for this measure because it’s just common sense,” said Krekorian in a statement posted late Tuesday. “People in Los Angeles and throughout the country understand that common-sense steps like this are necessary to prevent tragedies that we see all too often. It’s a sad state of affairs that it’s more dangerous to be a preschooler than a police officer in this country. I hope that other cities, states and Congress will follow our lead.”

The proposed Los Angeles gun-locking scheme, which goes further than current state gun safety requirements, mandates that any handgun be stored in a locked container or disabled with a trigger lock that has been approved by the California Department of Justice.

The legislation was drawn up by City Attorney Mike Feuer, the inaugural co-chair of Prosecutors Against Gun Violence, and was based on a controversial ordinance in San Francisco that has been challenged all the way to the Supreme Court by the National Rifle Association.

Exemptions are in place for guns within “close enough proximity and control” of the gun owner and for those carried on the body in the home, however, as noted by plaintiffs in the San Francisco case, a firearm generally cannot be considered carried on a person while they are asleep.

Violations of the ordinance would be considered a misdemeanor but carry a maximum of six months jail time and a $1,000 fine as punishment.

Garcetti, a member of Michael Bloomberg’s Mayor’s Against Illegal Guns coalition, has until Nov. 6 to act on the measure. If signed, it would take effect in 30 days.