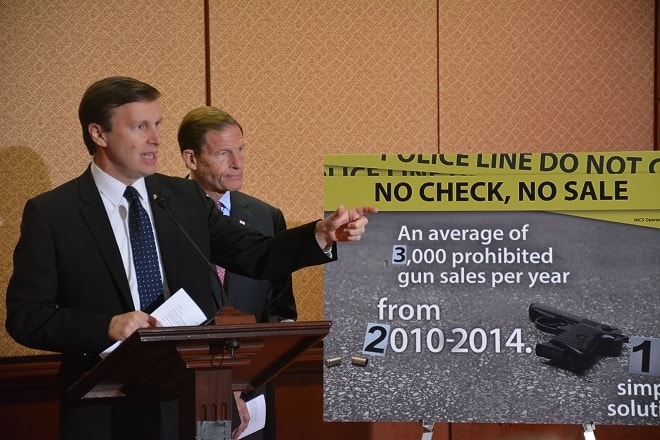 Gun control stalwarts Sens. Richard Blumenthal, Chris Murphy, Dianne Feinstein and others kicked off a legislative push to mandate an end to the “default to proceed” practice.

Under federal guidelines, licensed firearms dealers can transfer a gun immediately after given a “proceed” authorization through the Federal Bureau of Investigation’s National Instant Criminal Background Check System. In cases where the FBI gives a “delay,” it is up to the dealer whether to go through with the transfer after three business days.

The bill introduced by the Senate Democrats on Wednesday aims to strip away that ability, only allowing a gun to be transferred by a federal firearms licensee following completion of a successful check.

“No check, no sale must be the rule – enacted as law – to close a gaping loophole spreading the epidemic of gun violence,” said Blumenthal in a statement. “Waiting for a background check, even if longer than 72 hours, is a minor inconvenience far outweighed by the benefit of keeping lethal weapons out of the hands of dangerous people.”

Blumenthal held up a recent example of a default to proceed event ending up with a prohibited possessor receiving a gun.

“Over the past five years, 15,700 ineligible buyers have acquired guns simply because a background check could not be completed within 72 hours. One of them was Dylann Roof, who killed nine innocent churchgoers in Charleston with a gun he was ineligible to buy.”

The legislation proposed in the Background Check Completion Act, which was entered as S.2213 this week, would mandate that all gun transfers complete the NICS check before a firearm could change hands.

A similar measure, introduced in July to the House as H.R.3051 by South Carolina Democrat James Clyburn, has much the same structure and has lingered in subcommittee since being filed.

Gun rights groups and industry trade organizations slammed Clyburn’s proposal soon after its debut, citing that identities can be confused or records can be incomplete and that the rule compels the FBI to process checks in a speedy manner. Finally, advocates argue the rule is a roadblock to arbitrary denial of gun rights by keeping an individual in a perpetual “delay” status, thus depriving them of due process.

S.2213 has been referred to the Committee on the Judiciary.