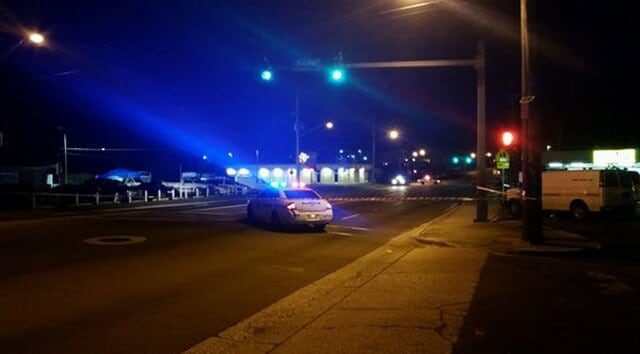 A pistol-packing pizza delivery guy in Jacksonville, Florida, stood up against two assailants who attempted to rob him Saturday night, sending one to the hospital with a gunshot wound.

The 30-year-old delivery driver, who works for Domino’s Pizza but has not been identified, was taking five pizzas to a house on Playschool Drive around 9:30 p.m. when he was approached by the two suspects, one of whom was armed with a 12-gauge shotgun, according to reports from the Florida Times-Union.

As the first suspect pointed the shotgun at the delivery guy and demanded he hand over the pizzas, the second suspect took the pizzas from him. Then, the armed suspect told the driver to empty his pockets, a request he would soon regret.

Instead of reaching for cash, the delivery driver slipped his hand into his pocket and pulled out a .380-caliber pistol. The driver grabbed the barrel of the suspect’s shotgun while reaching up with his other hand and fired at the suspects, who immediately ran away, dropping the shotgun in the process. The driver then called the police to report the attempted robbery.

Some time later, the injured suspect showed up at an area hospital with a gunshot wound and was subsequently taken into police custody for armed robbery. The second suspect has not been located at this time.

The incident remains under investigation, but crime and safety expert Ken Jefferson told a local CBS affiliate he believes the shooting was justified.

“This is a clear case of self-defense,” Jefferson said. “This person was working and was approached by two armed men.”

Jefferson added that if the injured suspect, who was last listed in serious condition, succumbs to his injuries and dies, the second suspect, if captured, could face murder charges.