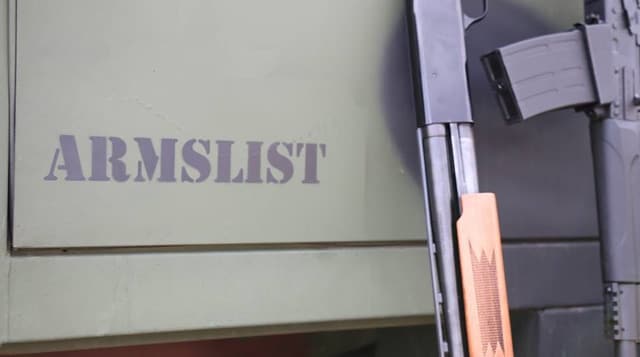 Armslist promotes its brand on an Army truck. (Photo: Armslist/Facebook)

New York City officials launched an investigation to find out if gun sellers are using the website Armslist to skirt city, state and federal laws.

Mayor Bill de Blasio along with the city’s Department of Consumer Affairs announced the investigation Thursday, saying the focus will be on the sellers who use the website to sell illegal and secondhand guns and not the website itself.

“In the absence of any concerted federal action to mandate background checks and tighten the marketplace of guns running amok in our country, New York City must use every tool at our disposal to save lives,” de Blasio said. “Through this investigation into Armslist, DCA is stepping up and doing its part to keep our city safer for every New Yorker – civilians and officers alike.”

According to the announcement, any person or business that wants to sell secondhand firearms must be a licensed dealer — licensed by the consumer affairs department, the Bureau of Alcohol Tobacco Firearms and Explosives, and the New York Police Department.

City and state officials were joined with gun control advocates in support of the investigation. The consumer affairs department said it issued a subpoena to the company on Oct. 19.

Armslist has long been criticized for its business model. Much like a classifieds section, Armlist allows licensed and private sellers to post ads for firearms. However, it does not process transactions so sellers, not the website, are responsible for vetting buyers.

Public scrutiny of the company was renewed in July after news broke that the gunman who opened fire on a Tennessee recruiting station and reserve facility obtained his guns through the website. In response, Armslist’s owner, Jonathan Gibbon, issued a statement saying the website does not sell guns but rather functions as a “free-speech forum.”

Besides criticism, Armlist has been forced into the courtroom. Just days after a Wisconsin court awarded two Milwaukee cops $6 million for their suit against a gun store, Armslist was named in a wrongful death suit filed Oct. 22 in a Wisconsin state court.

Last year, Armslist was a successful defendant in a federal civil suit that argued the website should have had a more active role in vetting buyers, but a three-panel judge said the website enables consumers to use a legal service and does not invite users to break the law.