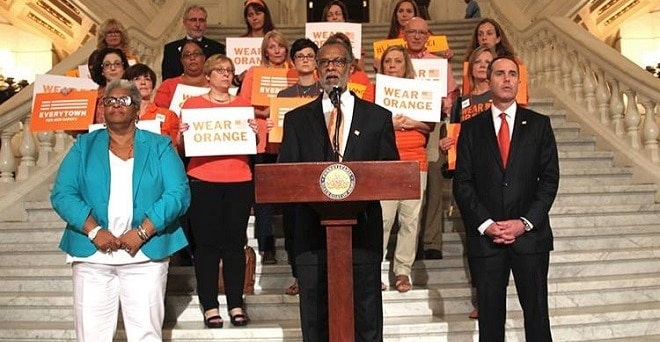 State Sen. Art Haywood, who has long championed gun control causes, wants those with handguns in the state to get a permit to keep them. (Photo: Facebook)

A Philadelphia area Democrat is seeking to pass legislation that would mandate legal handgun owners in the state obtain a license to be renewed every five years.

Similar to “permit to purchase” requirements in New Jersey, Illinois and New York, the bill would establish a firearm eligibility license for those who wish to possess a pistol or revolver in the Keystone State. Sponsored by Sen. Art Haywood, the lawmaker has publicly taken the stand that the Second Amendment does not protect an individual right.

“No statement in the 2nd Amendment is related to individual self-defense, but is instead related to collective security in the form of militas (sic),” said Haywood in remarks on his social media account. “At the time the 2nd amendment was written, the primary collective security concerns were slave insurrections and attacks by Native Americans.”

Although the 2008 Heller v DC decision by the U.S. Supreme Court held that personal firearms rights are protected under the Constitution, Haywood feels this was an error that will soon be corrected.

“Nevertheless, background checks and other gun regulations including handgun licensing are permissible restrictions under the current interpretation of the 2nd Amendment that have worked to reduce gun deaths,” he said. “Heller in due time will be overturned as was Plessy v Ferguson and regulation of gun ownership will continue in America.”

Haywood’s 20-page proposal, SB 1029, would establish a licensing scheme to legally possess a handgun in the state. Issued through the Pennsylvania State Police, county sheriff or city police chief following a background check that can take up to 45 days and include juvenile delinquency and mental health checks, the permit would be valid for five years.

Initial costs would be set at $50 with a $30 renewal and could be suspended by the issuing authority at any time. Those applying for a license would have be a state resident and complete 16 hours of firearms safety training from an approved instructor. If denied, an applicant would have 30 days to appeal the decision to the state police.

Active and retired police as well as active and reserve military or Pennsylvania National Guard members would be exempt from licensing requirements.

“This legislation would have no impact on criminal activity and would severely infringe on your Second Amendment rights as law-abiding gun owners,” reads an alert from the NRA’s Institute for Legislative Action. “Clearly, there is no dearth of existing firearm laws in Pennsylvania. There are more than enough statutory tools that exist at both the federal and state level just waiting to be enforced against criminals who misuse firearms.”

Senate Bill 1029 is currently referred to the Judiciary Committee. Although Pennsylvania has a Democratic governor who is seen as anti-gun, a strong Republican majority controls both chambers of the state legislature.