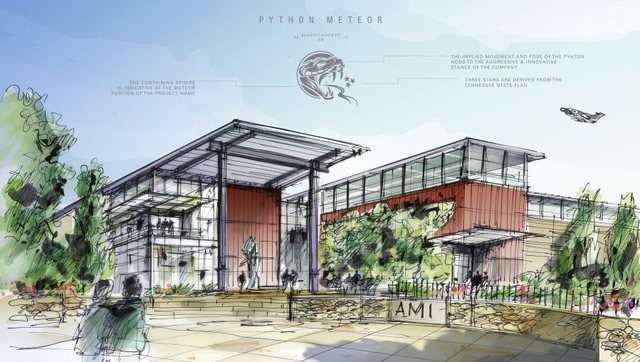 Rendering of the future AMI facilities.

With the support of the state government, high-end ammo maker Advanced Munitions International will invest more than half a billion dollars creating its headquarters in Alcoha, Tennessee, which is just outside of Knoxville.

AMI along with Tennessee Gov. Bill Haslam and the state’s Department of Economic and Community Development announced plans on Oct. 20 for the $553 million campus for the company’s manufacturing, distribution and research and development operations.

The company expects to break ground on the 235-acre site in the spring and open in the fourth quarter of 2018. The endeavor is slotted to create 605 jobs, primarily chemists and engineers with backgrounds in metallurgy, engineering, physics and energetics technology.

Joining the likes of Beretta USA, AMI executives cited the premier scientific facility Oak Ridge National Laboratory as a deciding factor in selecting Tennessee. Oak Ridge, which has one of the most powerful computers in the world, is located about 30 miles away from Alcoa.

In September 2014, Beretta broke ground just outside of Nashville in Gallatin to build a $45 million facility.

AMI currently operates in Arizona and is registered in Nevada. It owns a host of ammo companies such as ATAC Emcon, BlackOps and HPR Ammunition.