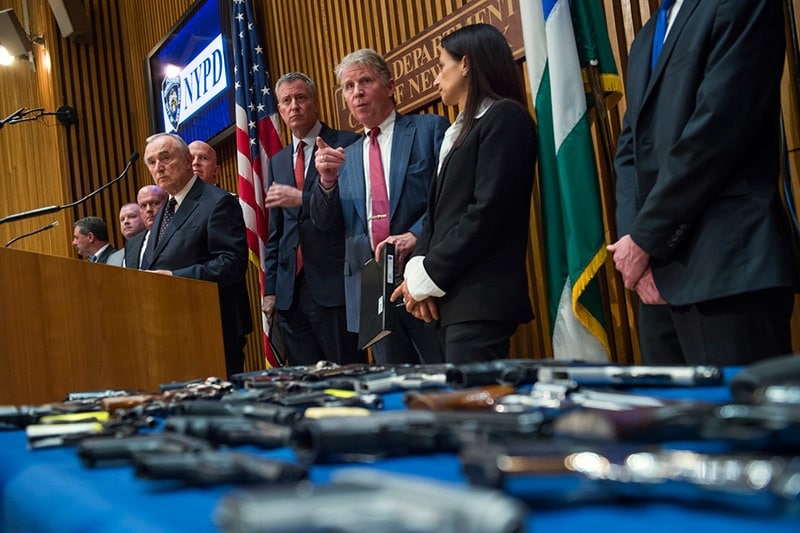 New York City officials brought attention the infamous “Iron Pipeline,” which criminals use to traffic firearms into the city from the south, during a press conference Thursday to praise work by undercover officers who arrested six men for an illegal gun sales operation.

“We have to put this in perspective. We talk about the Iron Pipeline. We’ve seen the human consequence of the Iron Pipeline – we’ve lost police officers, we lost parents, we’ve lost children because somehow this country still tolerates he notion of the free flow of guns,” New York’s Mayor Bill de Blasio said.

He cited the deadly shooting of a New York detective earlier this month as an example because in that instance the suspect had a gun that originated in South Carolina. And he identified loose gun laws in states south of The Empire State along with weak federal laws as enabling gun violence rather than stopping it — a long used argument contained in the phrase “Iron Pipeline.”

“The issue remains a significant problem and the reason it remains a significant problem is the easy and ready availability of huge amounts of firearms, particularly from down south,” Bratton said. “And our efforts up here are – we’re trying to deal with it, but we have a spigot that’s wide open down there and we don’t have a national or local ability to shut that spigot down at the moment.”

Despite an uptick in the crime rate from last year’s historic low, he added that shootings are down and that the police should be able to keep crime at bay with more officers, more funds and more resources.

During his six years as Manhattan’s district attorney, Cyrus Vance said including this arrest his office has filed 21 indictments against 64 arms traffickers and taken more than 1,000 guns off the street.

According to the indictment, from January 2014 to August 2015, undercover officers bought 74 firearms through 45 transactions for $52,000 and by the end arrested six men involved in the operation.

“We suspect that most of these guns, like nearly every illegal firearm in New York, came from out of state,” Vance said.

Two days after the press conference, de Blasio’s office along with the city’s Department of Consumer Affairs announced a probe into Armslist, an online classifieds section for firearms, to find out if gun sellers are using the website to skirt city, state and federal laws.