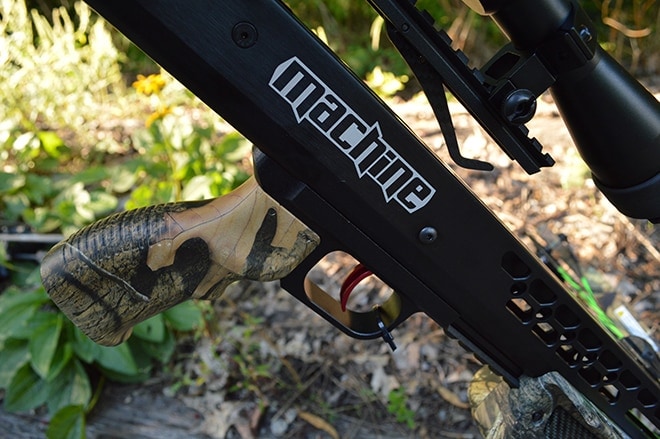 Bows and guns fall into two separate categories and always have.  However, as shoulder-mounted crossbows gain both state-legality and market-share popularity, the apples-and-elephants line between bows and firearms narrows a bit.  Gone are the days of heavy, gritty, creepy, slap-me bow triggers and awkward open pin sights.  Accuracy and range are supplanting dual-cam and let-off as archery buzzwords.

Here are five crafty ways crossbow manufacturers are borrowing a page from firearms design manuals to make their tools more appealing to a hungry gun audience.

One of the biggest advancements in the crossbow market over the last few years has been the trigger.  For years, it was once acceptable for bows to sport creepy, gritty, 7 pound-plus friction-driven triggers. Then somebody realized the importance rifle shooters place on crisp, light triggers and the impact a quality trigger can have on accuracy.

After trigger time with all of the major crossbow manufacturers, three stood apart from the rest: Carbon Express Intercept line, Scorpyd’s 2014-15 models, and the Killer Instinct Machine.  The CE Intercept Supercoil breaks at 3.4#.  The Scorpyd is high quality in all aspects of construction and innovation, though their triggers stood out in both test models, breaking between 2.9 – 3.4 pounds, crisp and clean.  The best of the bunch was a surprise from Killer Instinct with the guaranteed 2# frictionless Trigger Tech trigger on their new-for-2015 Machine crossbow. 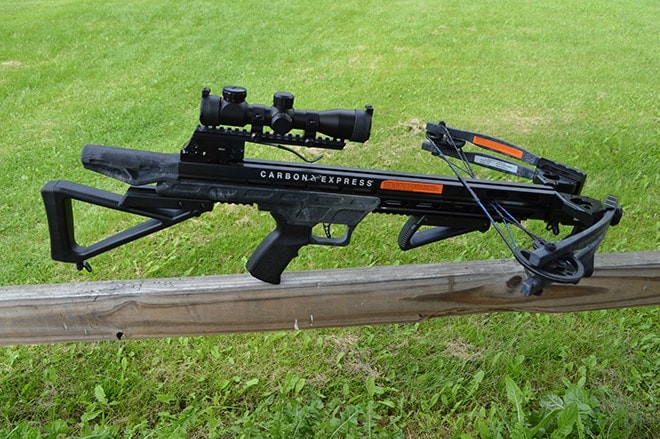 Crossbow companies tore the page right out of the book of AR-rifle design when it comes to crossbow furniture.  There are collapsible buttstocks and adjustable, interchangeable pistol grips, storage in the grips, and customizable forends. If that’s not enough, the furniture come in every camo and dip pattern of which you can think.  For instance, the Carbon Express Intercept Axon actually uses a multi-position AR buttstock, as do bows from Kodabow, Southern Crossbow, and Parker.  Likewise,  Killer Instinct’s Machine wears the industry’s first side-folder.  Both Carbon Express and Killer Instinct utilize AR-pistol grips that can be interchanged with any AR-grip of the user’s choosing.  Both also feature fully adjustable forends that ride on a picatinny rail.

Speaking of picatinny rails, gun owners are so accustomed to seeing these tactical rails on everything these days, they barely blink an eye. But who’d ever think picatinny rails would find their way onto bows?  Crossbow manufacturers are including top rails and bottom, front and back.  The Carbon Express Intercept Axon is the first crossbow to feature a long picatinny rail running the entire length of the barrel.  The variety of tactical rails not only provide multiple scope mounting positions, but also allow for lights or backup sights on the top, adjustable handguards and bipods underneath, and even buttstocks that adjust along the lower rear rails.   So much for “gray-is-the-new-black”; now, customizable is the new everything.

Forget everything you ever knew about bows.  Heck, you probably won’t even recognize these creatures, but they are likely the future of crossbows.  Scorpyd is leading the way with what they call “Reverse Draw Technology,” wherein the riser and limbs are reversed and the string is on the leading edge of the bow.  Not only is the balance of a reverse-style crossbow phenomenal when compared to the front heavy counterparts, but the significant increase in power stroke length equals incredibly faster bolt speeds. 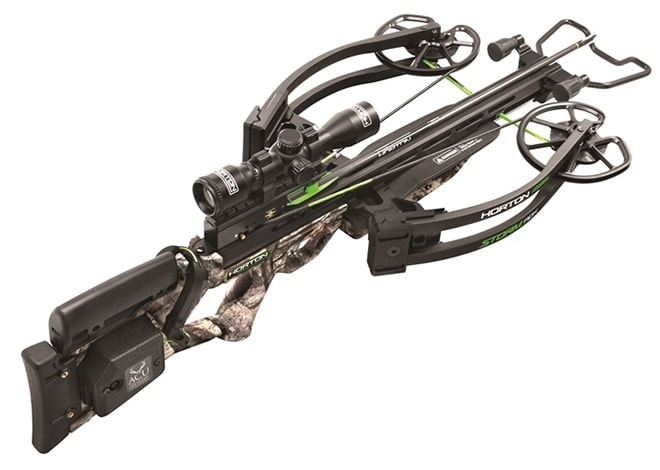 For instance, Scorpyd’s latest crossbow launches bolts up to 440 fps while an average standard crossbow clocks in around 325-365 fps.  That also equals flatter trajectory. Rifle shooters are quick to name the flattest shooting cartridges and the true old adage: speed kills.  In addition to Scorpyd, both the Barnett Raptor and now-Ten Point-owned Horton Storm are high on the reverse-crossbow market.

Those picatinny rails are there for a reason—built to hold not only accessories but also quality optics.  As crossbows increase in power and speed, they become capable of achieving penetration at longer ranges.  Crossbow manufacturers are creating the perfect storm for drop-compensating reticles in 2x, 3x and 4x crossbow optics.  The majority of crossbow packages include scopes of variable power, many of them illuminated in red and green with various intensities for dusk and dawn hunting situations.  Not all standard package optics are created equally and most major optics manufacturers are tapping into the fast-growing market with higher dollar, higher quality options.

Check out the Nikon Bolt, Vortex Viper XBR, Zeiss Terra and Leupold Crossbones. Remember that crossbow “recoil” is quite the opposite of a rifle’s rear-recoiling power and optics are built accordingly.

Crossbows do not compete “ballistically” with firearms.  That’s not the point.  Crossbows are, however, incorporating more and more features that were once firearm-specific.  Don’t get me wrong.  I’m first and foremost a compound bow hunter, and yes, I find crossbows to be an unfair advantage when compared with traditional vertical bows. However, love them or hate them, crossbows will own a large share of the market.  Heck, I own one myself, greatly enjoy shooting it, and crossbows have their place in any arsenal.  For gun hunters on the fence about crossbow hunting, this is the perfect segue.  Besides, anything that gives you reason for a longer hunting season has got to be good, right?