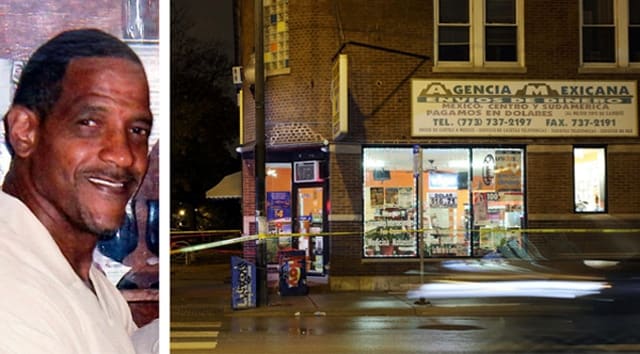 Reggie Gildersleeve (left) was out on bond after an October arrest at the time of the weekend robbery. (Photo: Chicago Tribune)

A 55-year-old man was shot and killed by a legally-armed patron while attempting to rob a store in Chicago Saturday night in the Gage Park neighborhood.

According to witnesses, the suspect, who was later identified as Reginald Gildersleeve, entered the store around 7 p.m. wearing a mask, displayed a gun and announced a robbery to the woman behind the counter, the Chicago Tribune reported. Moments later, another employee emerged from the back of the store where a currency exchange is located.

Gildersleeve then began to corral the two women – ages 55 and 17 – to the back of the store, and that’s when the concealed carry license-holder stepped in. The two men engaged in “some kind of confrontation,” during the course of which Gildersleeve was shot multiple times in the chest, according to Anthony Guglielmi, spokesman for the Chicago Police Department.

At 7:10 p.m., Gildersleeve was pronounced dead on the scene. No other injuries were reported.

Authorities confirmed the armed citizen had a valid concealed carry license, as well as a firearm owner’s identification card. Gildersleeve, who had a lengthy criminal history which included at least one other robbery.

Police said charges aren’t likely to be brought against the armed citizen, who was only identified as a 44-year-old male, but Gildersleeve’s stepson, Igbinosa Oronsaye, believes there is more to the incident than what’s being said and does not think the man acted appropriately.

“Something doesn’t seem right,” Oronsaye said. “Reggie doesn’t even own a gun. He couldn’t own a gun if he wanted to,” likely referring to Gildersleeve’s criminal history. But authorities indicated that the gun used by Gildersleeve, which was recovered at the scene, was fake.

Oronsaye added trained gun owners should be able to wound first and kill second, and that Gildersleeve did not deserve to die.