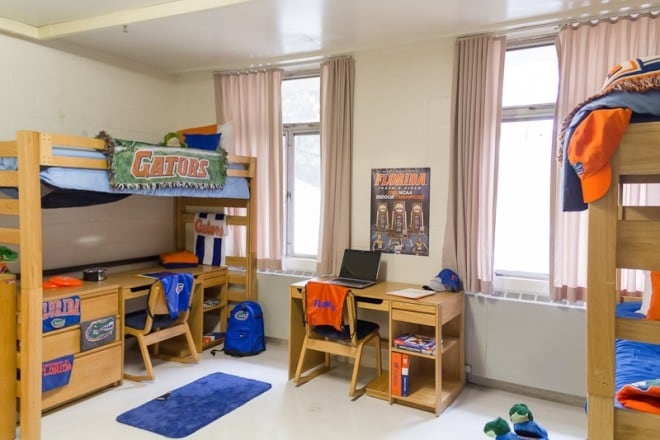 University of Florida dorm rooms are gun free zones and will continue to be for the time being. (Photo: UF)

A three-judge panel of the First District Court of Appeal on Friday ruled against a suit brought by gun rights advocates seeking to overturn a prohibition on guns in college dorms.

The suit brought in 2014 as an appeal to a case from the Circuit Court for Alachua County, pitted Florida Carry against the University of Florida in an effort to allow students to have guns in campus housing for self-defense.

Florida Carry argued a dormitory or residence hall is in essence a home for students, and by refusing to allow student residents to have firearms in the hall rooms on university property, violated their individual right to bear arms at home, as outlined by the 2008 U.S. Supreme Court Heller decision.

FSU’s legal team made the opposing argument that the prohibition against firearms on campus trumps that belief even if a residence hall room is considered a home, to which the court agreed.

“We find Appellant’s reliance upon Heller to be misplaced,” Judge Joseph Lewis Jr. wrote in his 43-page ruling for the unanimous three judge panel, noting that longstanding prohibitions on “the carrying of firearms in sensitive places such as schools and government buildings” should not be placed into doubt by Heller.

Judges Scott Makar and Timothy D. Osterhaus concurred with Lewis’s opinion, though Makar argued that Florida Carry’s case on the dorm issue fell flat due to the group’s lack of being able to produce a plaintiff who felt they were denied their Second Amendment rights, thus making the claim unworkable.

“The University’s firearms policy is not per se unconstitutional, but a set of facts may exist where its specific application raises concerns,” conceded Makar, going on to argue that, for example, a hotel on university property, or temporary housing at state ag schools in rural areas, may require different policies.

In a separate count, the court upheld that state university presidents, such as UF’s President Bernie Machen who was named in the suit, are not immune to punishment for violating state preemption gun laws.

Florida Carry Executive Director Sean Caranna told Guns.com that finding was something of a silver lining in the opinion.

“We’re very pleased that the court sided with us in ruling that violators of Florida Firearms Preemption law are not shielded by Sovereign Immunity,” said Caranna. “However, the court failed to consider important parts of the case regarding the various regulations of the University and did not properly review the ban on firearms possession inside a person’s home using the scrutiny required when Florida Constitutional rights are infringed upon.  We will be asking the court to reconsider its decision in light of these important discrepancies.”

The 1st DCA in 2013 previously ruled for Florida Carry in a victory for gun rights supporters when they held that state universities do not have the power to ban law-abiding gun owners from keeping loaded firearms in their vehicles while on campus.

Two bills are currently winding through the state legislature that would enact new laws to allow for those with concealed carry permits to bring firearms onto Florida’s public colleges and universities, including UF.