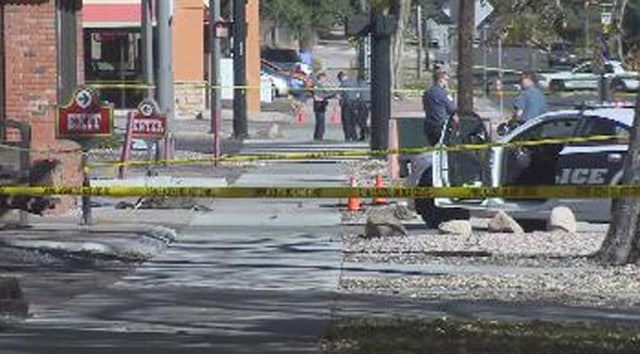 Authorities are still trying to determine a motive for a shooting rampage in Colorado Springs Saturday morning that left four dead, including the gunman.

Matt Abshire, who witnessed the shooting, described the gunman as walking down the road – a rifle in one hand and a revolver in the other – calmly and collectively, not in a rush, seemingly without a care in the world before shooting a bicyclist just before 9 a.m. The gunman then turned his attention toward two ladies sitting on their porch and shot them both.

Naomi Bettis, a neighbor of the suspect, who has not yet been publicly identified, made a similar statement, adding that the gunman did not at all appear to be angry.

“He just looked like he was somebody that was going to be on a mission,” Bettis said.

Bettis called the police when she saw the man with the guns, and Abshire also called when he heard gunshots. After placing the call to 911, Abshire also attempted to help the injured women.

“I took my shirt off. I put a pressure on her wound. I picked her head up, posted her in the corner,” Abshire recalled. “I looked down to my right – there was another lady that was shot in the jaw.”

But both women, along with the bicyclist, died. The women were later identified as Jennifer Vasquez and Christy Galella. It is unknown if they were acquainted with the suspect.

Officers responding to the scene confronted the suspect, who according to witnesses, aimed a gun at the officers before he was shot.

Bettis said the gunman, who was also reported to have set the second floor of a residential building on fire, shot the victims and did not even look back. “He just went on a rampage,” she said. Abshire called the incident “mind-baffling,” noting that it is the sort of thing that you never think you will be around to witness.