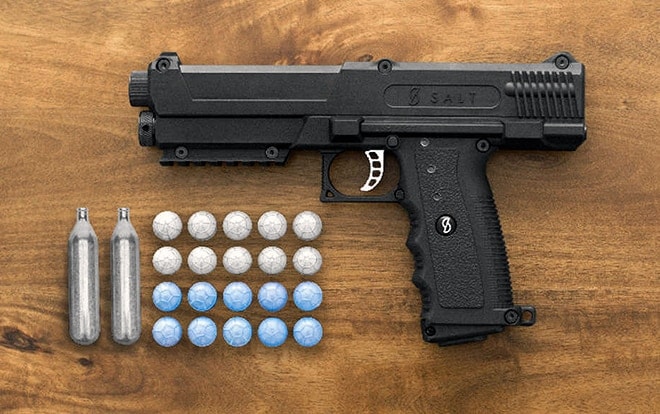 The free market is a beautiful thing.  We can debate what level of regulation is necessary to maintain a free market and at what point our models ceases to be free, but economic history, particularly in the centuries since the West escaped feudalism, demonstrates that when people have the opportunity to work for themselves, to develop goods or services that they invent or improve, and to buy such things that appeal to them, their society becomes richer and more productive.

This does mean that there will be many things for sale that make me wonder what the buyers and sellers are thinking.  The Twilight series comes to mind here.  But as long as the product or service being offered can be used in a manner that doesn’t harm people who don’t want to be involved, you should be free to throw away your money as you please, no matter what I have to say about it.

An example of this for me is the Salt gun, a self-defense tool on offer from the Salt Supply Co.  I’m careful about the phrasing there, since the company insists that this device is not a weapon, even though it is a gun.  Of course, the regulations say it’s not a gun, since it uses carbon dioxide cylinders to propel a pellet.  And perhaps the company doesn’t know what it’s talking about, given that they seem to think that modern guns still use black powder—see Big Idea #3 on their web page, where they also call this new gadget a weapon.  We’re also treated to quotations elsewhere from Arthur Kellermann’s infamous study on how wicked it is to possess a gun.

Confused?  Let’s cut through the nonsense.  The Salt gun is an air gun that shoots a pellet filled with a proprietary powder whose active ingredient is oleoresin capsicum from ghost peppers—not sodium chloride, despite the name.

In other words, it’s about as disturbing as a sixth member of the Spice Girls.  Or not even that much.  It’s a can of pepper spray, all grown up with what looks like sights and an accessory rail.  Apparently it’s made for people who find an aerosol can challenging to use effectively.

But nothing is safe from the hand-wringing crowd.  Mike Monteiro, a design-shop owner in San Francisco who calls himself Mike MonTERROR on Twitter, caught sight of Salt’s Indiegogo effort to raise funds and flew into a tizzy over fears that yet another school shooting would be the result.  Monteiro and his Twitter followers raised a stink that got the funding campaign removed on grounds that Indiegogo prohibits offering weapons or accessories as a reward.

Where does all of this leave us?  The Salt gun is currently for sale.  For $279, you get the pellet gun, ten live rounds and ten practice rounds, and two propellant cylinders.  If such a thing is what you’ve always wanted, your wish has been fulfilled.  But I won’t buy one.

Less-than-lethal weapons have their place in the armory of self-defense.  In too many states, pepper spray is the alternative to law-abiding Americans who are denied the opportunity to carry handguns legally.  But the Salt gun is certainly a weapon, so all the talk about how it’s safe is disingenuous.  The pellet hits as hard as a baseball at fifty miles an hour—A Christmas Story, anyone?—and the active chemical triggers the equivalent of an asthma attack when inhaled.  Just like other weapons that are meant to be sublethal, it does look like something with the chance to cause death or at least serious injury.  Check the laws of your state, but my understanding of Arkansas law is that I’m only justified in using this level of force when my own life or the lives of other innocent people are in danger.  In a situation like that, I want a tool that will stop the attack, not make the attacker tasty.

Make your own choices.  For me, peppers are appropriate in chili.  In self-defense, I’ll stick to identifying my targets and using equipment that has a long history of working.